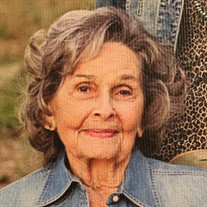 Wilma Swallows Overstreet Wilma was born to John and Lora Swallows in Muncie, Indiana on October 2, 1924. She went to the Lord, her creator, on March 15, 2018. Between these two dates of almost 93 ½ years, she lived a remarkable life. Her Legacy? A group of related, interconnected by birth and marriage, people who loved her and will miss her. Her husband of 41 years, Joe Overstreet, died in 1987 after a long illness and is interred in Rose Hill Cemetery, Kissimmee where Wilma will also lay in rest beside him. Joe had two young daughters at the time of their marriage – Mary Jo and Betty Caroline and they later had a son Rawl. Wilma helped raise the daughters just as if they were her own. Mary Jo married Babe Ashton who has since passed on they had two children, Quinn and Mike. Mary Jo later married Joe Jackson. Quinn married and has two children, Dax, and Aldyn. Mike has a son, Miles. Betty Carolyn married Bill Langston. Wilma’s son Raul grew up and married Sharon (the daughter of the late Ben and Jewel Crawford) and they have a son Waylon, and a daughter Jody. Waylon is married to Brittany and they have a son Reagan. Jody is married to Billy Kidd with no children, yet. Wilma has a brother, Levi Swallows (Mary Lois, deceased). Levi’s children are Steve (Lynn) and Jim (Beth) and three sons of Mary Lois, whose names are James (Debbie), John and Steve (Kim) McKillop. Wilma has a sister, Alma Drummond (Glenn) whose children are Dan (Janie) and Keith (deceased). But her legacy is more than this. She was well known in the cattle industry and it didn’t hurt that she married into a family, descendants of Osceola County Pioneers, the Overstreets. She was the first woman selected to be Honorary Wagon Master of the tenth Osceola County Wagon Train and Trail Ride. She was, also, the first woman rancher named Cattle Person of the Year of the Florida Cattleman’s Association. And, as a little aside, Wilma was a runner up of the title of “Miss Dixie” at New Smyrna Beach in 1944. She will always be remembered as kind, generous and loved by her family and all who knew her. In lieu of flowers, the family requests donations in Wilma's memory to the Cornerstone Hospice, 3283 South John Young Parkway, Suite J, Kissimmee, FL 34746

Wilma Swallows Overstreet Wilma was born to John and Lora Swallows in Muncie, Indiana on October 2, 1924. She went to the Lord, her creator, on March 15, 2018. Between these two dates of almost 93 ½ years, she lived a remarkable life. Her... View Obituary & Service Information

The family of Wilma Swallows Overstreet created this Life Tributes page to make it easy to share your memories.

Send flowers to the Overstreet family.