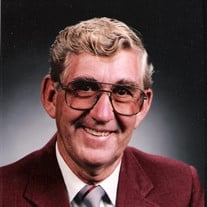 Mr. William Edward Moore 88 of Saint Cloud, Florida passed away on Tuesday August 1, 2017. He was the beloved husband of Camille Moore who preceded him in death. William was born in Canton, Ohio on December 18, 1928 to Frank and Anna Moore. William had two siblings the late Frank Moore and the late Barbara Freetage. William married Camille on November 24, 1949 and spent 67 years together. William graduated from Alliance High School. He was a member of the class of 1948. He enlisted in the United States Navy and served during World War II and the Korean War. William was a journeyman electrician working at the American Steel Foundry in Alliance, Ohio for 31 years. In addition, during the time he was employed at the American Steel Foundry William owned and operated a residential and commercial electrical contracting company. After moving to Saint Cloud, Florida he worked for Walt Disney World as a high voltage technician for 12 years before retiring in 1992. After retiring he and Camille traveled through out the United States visiting all states with the exception of Hawaii. William was a member of the McFadden Masonic Temple in Alliance, Ohio. He served as Worshipful Master of the Lodge from 1976 through 1977. In addition, he was a 60-year member of the Free and Accepted Masons of Ohio. Both William and Camille were licensed pilots. During the time they were flying, they owned a Piper Cherokee 180 and Piper Tri Pacer. They made several trips between Ohio and Florida. William was the father of 4 sons, Timothy (Mary Jane), Steven (Rebecca), Michael (Barbara), and Dana (Christina). He had 12 grandchildren Timothy, Justin, Jonathan (Jessica), Erin, Matthew (Heather), Amy, Lindsey (Aurelio), Jeffrey, Ryan (Kristi), Jeremy, Emily, and Brittany (Michael). He had 11 great grandchildren. William’s greatest joy was spending time with Camille and his family. A celebration of William’s life will be held at 4:00pm on Friday August 4, 2017 at Fisk Funeral Home with Pastor James Callen officiating. There will be calling hours prior to the service from 3:00 to 4:00. The family requests in lieu of flowers please make a donation to the American Heart Association (800-242-8721).

Mr. William Edward Moore 88 of Saint Cloud, Florida passed away on Tuesday August 1, 2017. He was the beloved husband of Camille Moore who preceded him in death. William was born in Canton, Ohio on December 18, 1928 to Frank and Anna Moore.... View Obituary & Service Information

The family of William Edward Moore created this Life Tributes page to make it easy to share your memories.

Send flowers to the Moore family.