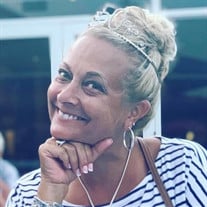 Tracey Janine Ashton, age 50, went home to be with the Lord on April 4, 2021, after a long battle with Metastatic Breast Cancer. Tracey is predeceased by her father, Kevin Flanagan, and survived by her mom, Melanie (Darren) Nichols, siblings, James Griffin, Kelly Flanagan, Danny Flanagan. She also leaves behind her nephew, Wyatt Griffin, nieces, Chloe Griffin, Layla Flanagan, and Uncle, Joe Furia, along with many beloved friends. Tracey was a veteran of the United States Army, where she served as an E4 Specialist and saw combat in the Gulf War and Desert Storm. She earned The Army Commendation Medal when she ran into a burning army barracks to evacuate 14 sleeping servicemen/women. After her honorable discharge from the army, she joined The National Guard and was deployed back to California where she defended her country again during the LA Riots. She then returned to Florida where she ended up in Orlando and pursued her career as an IT Specialist. She excelled in her job and worked for a large law firm, Akerman LLP. She then took a job consulting which allowed her to travel worldwide which became her passion. After 2 years and her consulting contract had ended, she moved to Miami and returned to Akerman LLP for 13 more years. She excelled there as well and was able to do more traveling and made lifelong friends along the way. Her colleagues said her best skills were the ability to understand what the users needed and building the best relationships. At age 40 she was diagnosed with an aggressive form of breast cancer, but she was determined to live life to the fullest. Through many surgeries and treatments later cancer returned when she was almost 5 years out. Still determined to survive she continued to fight, travel and live life with all she had. Tracey loved being outside and anything to do with the ocean. She loved sports and would never miss a chance to go to a Marlins or Gator game. Shopping was always at the top of her list and we shared many hours in Marshalls. Tracey was as comfortable in sweats and sneakers as she was in heels and a party dress. Let's not forget the many hours on the dance floor. She would never miss a chance to help a friend celebrate a birthday, wedding, or birth of a baby. She loved her family, friends and any animal she came across with all her heart. She was caring, generous, loving, and compassionate to everyone. She adored her family and especially her nephew, Wyatt and niece, Chloe. They meant everything to her and she would do anything for them. Tracey will never be forgotten and will live on in the hearts of many until they meet again. Celebration of Life will be held Saturday, May 1, 2021, at 4 pm at the VFW located at 915 New York Avenue, St. Cloud, FL. In lieu of flowers, contributions can be made to Metavivor.org or Metavivor Research and Support, Inc., 1783 Forest Drive #184, Annapolis, MD 21401.

Tracey Janine Ashton, age 50, went home to be with the Lord on April 4, 2021, after a long battle with Metastatic Breast Cancer. Tracey is predeceased by her father, Kevin Flanagan, and survived by her mom, Melanie (Darren) Nichols, siblings,... View Obituary & Service Information

The family of Tracey Janine Ashton created this Life Tributes page to make it easy to share your memories.

Tracey Janine Ashton, age 50, went home to be with the Lord on...

Send flowers to the Ashton family.