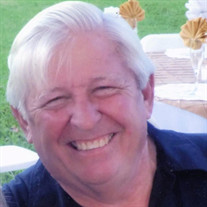 Thomas David Fertic "Tom" was born on April 22, 1942 and left this mortal life on December 4, 2020 at the age of 78. He left behind a legacy of service to his county, church, employers and family. After fighting the battle of cancer his weakened body deferred him from carrying forth with his self-sufficient attributes. In spite of his declining health the last project he completed by himself was wiring a two-stall barn. He joined the Church of Jesus Christ of Latter Day Saints when he was 18 years old. He married his wife 59 years ago, Maureen Justesen Fertic at the age of 19 on December 30, 1961 while on a Christmas week furlough from the Army and began the journey of married life stationed in El Paso Texas for 3 years and was honorably released June 22, 1964. While attending college in St. Petersburg Florida, he was blessed in becoming a father of his first child Valera M. Fertic Senden born on February 24, 1966, a beautiful little girl. It was then Tom decided to move home to St. Cloud Florida where his family roots began. He worked as an electrician and eventually became a master electrician and started his own company plus worked for Lockheed Martin Marietta for 31 years. He had his first son, Thomas Jared Fertic born on June 1, 1968. Thomas Jared passed away from a heart attack on Friday, November 20, 2020 at the age of 52 just 2 weeks prior to the death of Tom, his dad. A tremendous and acute sorrow to Tom and all the family members. Number #3 child, Samuel Keith Fertic, was born on July 19, 1970 in the car under the only red light in St. Cloud on New York Avenue & 13th Street (Hwy 192); a tremendous delight to his growing family. Number #4 child, Seth David Fertic, was born 12/7/1972 on Pearl Harbor Day and Tom was thankful for another awesome son. Number #5 child was Monica Ann Fertic (Wright) born on 1/20/1975, another precious little girl. Number #6 child Jarom Gid Fertic was born on 5/21/1978, another amazing son. Tom loved to work on his ranch and he loved his cattle and they became his pets and they loved him. He loved watching his sons and daughters perform in their sports at school and helping them in all their needs. He loved serving others and serving in church callings and was only 24 years old when he became the branch President of the Kissimmee-St. Cloud Branch back in 1966. His work ethics were most outstanding and he would not give up until a job was finished no matter how many hours or days it took. He will be missed by all his remaining 5 children and their spouses, his 14 grandchildren, 5 great grandchildren, his devoted wife, the mother of his children; his sister, Sylvia Fertic Wolford and husband Buddy. He loved his family and all his dear friends. He has left an impact on all his friends and family. Though we know that he is now free from physical pain and suffering, we shall forever miss his spunky personality, his desire to be of service to all mankind, and his endurance to survive the trials of life. May he rest in peace and feel and know of the joy he gave to the world.

Thomas David Fertic "Tom" was born on April 22, 1942 and left this mortal life on December 4, 2020 at the age of 78. He left behind a legacy of service to his county, church, employers and family. After fighting the battle of cancer his weakened... View Obituary & Service Information

The family of Thomas David Fertic created this Life Tributes page to make it easy to share your memories.

Send flowers to the Fertic family.