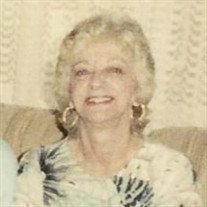 Suzanne M. Stewart, 84, of Saint Cloud, Florida, passed away on Tuesday, November 16, 2021. She was born on January 23, 1937 and was later adopted by Author and Neva Fogle in Franklin, PA. Suzanne is survived by her two sons, Edward V. Stewart, Jr. and wife Lorie of Saint Cloud, FL, and Clinton W. Stewart of Orlando, FL; daughter, Deborah S. Kozar of Monaca, PA; six grandchildren: Jenny, Amber, Chelsea, Luke, Kris, and Aaron: seven great-grandchildren: Hanna, Jayden, Avery, Lillykate, Ivy, Calvin, Addison and Kameron. She was a homemaker, a glass worker, and a caregiver to the elderly. She met the love of her life (Edward) at A&P super market. Shortly after she graduated, they were married and moved to Aliquippa where Edward worked at the company store. They were married one day short of 60 years. Somewhere during the mid 60's she started bowling which she won multiple championships and could be found late on Saturday night bowling Scotch Doubles until early in the morning. Her passion was music, she loved to listen to music. The first concert she ever attended was when she took her youngest son to see KISS. She loved to listen to Clint play at located establishments and often would tell others to be quiet so she could listen to Clint. In addition, she was a great baker and cook. There was nothing she liked more than to bake Christmas Cookies with her granddaughters. Members of the family are still trying to imitate her Thanksgiving Stuffing, a task that may never be accomplished. Arrangements under the care of Fisk Funeral Home, 1107 Massachusetts Avenue, Saint Cloud, FL 34769 (407) 892-2155 Online condolences can be given at fiskfh.com. Celebration of life for both Suzanne and Edward Stewart will take place on January 8,2022 from 1pm to 5pm at the St Cloud VFM.

Suzanne M. Stewart, 84, of Saint Cloud, Florida, passed away on Tuesday, November 16, 2021. She was born on January 23, 1937 and was later adopted by Author and Neva Fogle in Franklin, PA. Suzanne is survived by her two sons, Edward V. Stewart,... View Obituary & Service Information

The family of Suzanne Stewart created this Life Tributes page to make it easy to share your memories.

Send flowers to the Stewart family.