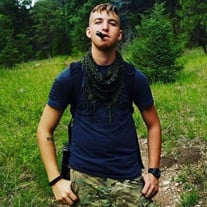 Shawn Marshall Bulle, Age 26, entered into rest on September 22, 2018. Shawn was born on June 30, 1992 in Phoenix, AZ. He grew up in Prescott Valley and Seligman, AZ where he graduated from Seligman High School as Salutatorian in 2010, he also enjoyed his summers with his mother in New Mexico. He Served in the United Stated Air Force from September 2010 to September 2017. While in service he traveled around the world and saw many beautiful places from Germany to Greece. He then moved with his wife and two boys to Saint Cloud, FL in October 2017 where he worked as an adventure zipline tour guide. Shawn was a thrill seeking, fun loving, enthusiastic man that saw good in everyone and had the impact to cheer any frown, break open any shell, and enjoy every moment that he encountered. His favorite greeting was a giant hug followed with “It’s fantastic to see you” to all his family and friends. He enjoyed being outdoors. He often went on hikes with his wife and their dogs, Shiloh, Caaarl, and Ace. He enjoyed time in the mountains, camping, and spending time at any water front with his mother, sister and step-father. He loved going kayaking with his son Bear, driving his RC car, listening to music, playing with his dogs, and spending time with his family and friends. Shawn was the type of person to tell you, “Don’t knock, just walk in” because he loved to entertain and just to be surrounded with people. He had the best ear to lend to anyone that needed and genuinely cared about everyone close to him. He is survived by his Wife Heather Rae Bulle, and their two sons Bear Hunter Bulle & Ares Marshall Bulle; his daughter Adria Guerrero; His Mother and Step-Father Heather & Toby McBride from Morenci, Arizona; His Father and Step-Mother Shawn & Michelle Bulle from Seligman, Arizona; His Siblings Logan Carr, Sedona Bulle, Payson Bulle, Sabrina Bulle and Andee Cassel; His Maternal Grandparents Ron & Janet Wofford of Silver City, New Mexico; His Paternal Grandparents Marshall and Delaine Bulle of Rye, Colorado; as well as many Aunts, Uncles, Cousins, and friends. He is preceded in death by his younger brother, Nathan Tyler Bulle. A Gathering will be held Thursday, September 27,2018 at 9:30 AM-10:30 AM with a Celebration of Life following located at Fisk Funeral Home in Saint Cloud, FL

Shawn Marshall Bulle, Age 26, entered into rest on September 22, 2018. Shawn was born on June 30, 1992 in Phoenix, AZ. He grew up in Prescott Valley and Seligman, AZ where he graduated from Seligman High School as Salutatorian in 2010, he... View Obituary & Service Information

The family of Shawn M. Bulle created this Life Tributes page to make it easy to share your memories.

Send flowers to the Bulle family.