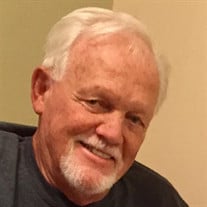 Ronald J. Hawthorne, 76, passed away peacefully after a long battle with lung cancer on Monday August 20, 2018 surrounded by friends and family at his home in St Cloud, Florida. Ron graduated from Hanover High School in 1959. After attending Technical School in Southern NH he volunteered for the US Army serving in Germany from 1962-1964 with 509th Infantry, 8th Airborne Division. In 1965, he served with 327th Infantry, 101st Airborne at Fort Campbell, Kentucky. After an honorable discharge, he worked for Bailey Brothers Auto Jobbers, Honey Gardens Dairy, and Valley Tire. In 1978, he became the owner of Enfield Garage Tire & Auto Sales until his retirement in 2002. Ron was especially proud of helping as a founder of the Turning Point Club in White River Junction, VT. He was an active member of Alcoholics Anonymous since October 19, 1980. He will now be attending the Big Meeting with special friends who have gone before him. The best years of his life were spent traveling America with his wife, Louise, as full timers in their motor home. Ron and Louise settled in St Cloud, Florida in close proximity to the Chases, their friends of 60 years. He is survived by his loving wife and best friend, Louise Desrochers-Hawthorne of St Cloud, FL, his daughter Kathleen of Mesa, AZ, four grandchildren & five great grandchildren, his sister Sara Koury of Washington, DC, brother William Relation of MA, sister-in-law Elaine, nieces Kim, Dina and Marci of Hanover Ctr, NH, and Cyrena of Washington, DC. He was pre-deceased by his son Jarrett of NC, brother Donald of Hanover Ctr, NH, parents James & Wilma of Hanover Ctr, NH and mother Helen Relation of East Dennis, MA. At Ron’s request there will be no calling hours. A Celebration of Life will be held at the Turning Point Club, 200 Olcott Drive, White River Junction, VT on September 29th @ 2pm. At his request, please dress casually.

Ronald J. Hawthorne, 76, passed away peacefully after a long battle with lung cancer on Monday August 20, 2018 surrounded by friends and family at his home in St Cloud, Florida. Ron graduated from Hanover High School in 1959. After attending... View Obituary & Service Information

The family of Ronald James Hawthorne created this Life Tributes page to make it easy to share your memories.

Ronald J. Hawthorne, 76, passed away peacefully after a long...

Send flowers to the Hawthorne family.