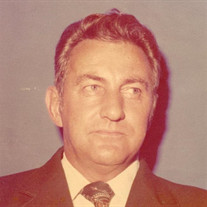 BOWERS – Ronald Russell Bowers, age 89, passed away March 16, 2019. He was born August 31, 1929 in Louisville, Ohio. He enlisted in the United States Air Force in 1950, during the Korean War. He served 4 years in England with the 3rd Motor Transport Squadron. After being discharged in 1955, he worked at Myers Molasses Co. as a truck driver, in Alliance, Ohio and married his sweetheart, Doris Kraft. He was a member of the Ohio Auxiliary Police, Masonic Lodge, Bahia Shriners Provost Guard, past member of the American Legion Post in North Georgetown, and a member of the St. John’s Evangelical Church. In 1970, he moved his family to St. Cloud, FL and began his career as a Feeder Driver for UPS where he retired from in 1992 as a Feeder Supervisor. He always enjoyed family gatherings, fishing, boating, traveling, and playing Euchre. Ron is survived by his devoted wife, Doris, of 63 years, his brother Ned Bowers, and his 5 children; Brad Bowers (Dorinda), Greg Bowers, Ronda Denzer (Buck), Robin Bradley (Steve), and Cheryl McGhee (Darren). Grandchildren; Jeremy Bowers (Leslie), Jennifer Dabrowski (Erik), Jonathan Gaudet (Sophie), Wesley McGhee, Kaycee Bradley, and Tyler Bradley. He also has several great-grandchildren. He is preceded in death by his parents, Russ and Grace Bowers, his brother Richard Bowers and his sister Margaret Luthie. Visitation will be held Thursday, March 21, from 5:30 – 8:00 pm at Fisk Funeral Home in St. Cloud, FL. His funeral will be Friday, March 22, at 10:00 am at Fisk Funeral Home, with the Reverend Hugh Lackey officiating. Burial with military honors will follow at Mt. Peace Cemetery. The Bowers family will receive family and friends after the funeral at St. Cloud Presbyterian Church. In lieu of flowers, please donate to the Shriners Hospitals for Children.

The family of Ronald R. Bowers created this Life Tributes page to make it easy to share your memories.

Send flowers to the Bowers family.