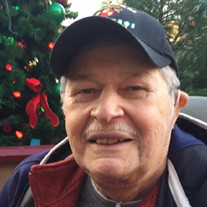 Roger Linn Rose passed away Saturday morning, November 16, 2019 in the arms of his wife, Sherry Rose, of 53 years. He died in the VA Hospital of Lake Nona in Florida. He had not been in the best of health for many years having survived a massive heart attack and quadruple bypass in 2010 and two bouts of cancer. His once stout, solid body had finally had enough, though his mind and spirit continued to fight through it all. Roger was born in Fort Wayne, IN on February 11, 1945 to Charles and Lucile Rose. He was their second son behind Larry (Marianne) Rose and the twin to Sharon (Harald) Jacobsen. Their family was rounded out by Connie Ferguson. He was preceded in death by both Charles and Lucile. Roger attended East Tipp High School and graduated in 1963 where he was voted Class President, played football and ran track, was involved in 4-H and FFA, won the state championship for farm cattle oiler verbal demo. He was also in the band where he won many 1st place medals in competition while playing the trumpet. Roger also attended Purdue University for a semester in 1968. He was a Boilermaker to the end. He enlisted in the Marine Corp after high school and served from 1963 - 1968. During that time he attained the rank of Sergeant, climbed Mt Fuji in Japan, went through jungle warfare training in Okinawa, did a tour in Vietnam seeing combat action with the 3rd Recon Battalion 3rd Marine Division and spent his final 2 years of service in Rota, Spain. It was here that he graduated from NCO School and started up the drum and bugle band that played in many parades around Spain. His presence was large during his duty earning him the Good Conduct Medal, National Defense Service Medal, Meritorious Mast to E-5 Sgt, Republic of Vietnam Campaign Medal, Vietnam Service Medal, Navy Unit Commendation Medal, Presidential Unit Citation, and Cold War Victory Medal. Roger worked for L.S. Ayers, Sherman-Lange Mayflowers Movers and later was the owner of the L.L. Rose Company and last worked for Empire Carpet before retiring in 2009. But he was best known for his work as a small business owner. He started his first Pizza King in 1976 in Mulberry. In 1977 he started the Lost Frontier in Thorntown, In. In 1980 he started the Pizza Kings in Jamestown, In and Merrillville, In. He was also the owner of the Dayton Liquor Store in partnership with his best friend of many years, Joe Rehwinkel. Roger was a bus driver for the Clinton Prairie School Corporation for many years and coach for the Mulberry Minor Girls softball team that went on to win the championship one year. Roger was on leave from the Marines when he met Sherry Threlkeld in December 1965 at a Christmas party. Once he left to go back to base they corresponded by *gasp* US Postal mail. Roger called Sherry on Valentines Day 1966 to propose. They were married on April 2, 1966. She survives. They have three children: Tambrala (Tammy, -Tim) Kniess, Jennifer (John) Kerchaert, and Ted (Marianne) Rose. Through the years, Roger developed parental-type relationships with many of his childrens’ friends, but his relationship with Chris (Jessica) Blake developed into a deeply respected friendship as the years passed. Chris was like a second son to the family. Roger enjoyed playing golf with his brother Larry Rose, son-in-law John Kerchaert, and brother-in-law Tom Lewellen (Pam). He also enjoyed riding his Harley Davidson. His greatest love was for his family, especially his grandchildren Megan Kerchaert, Graham Rose, Taylor Rose and Alexis Kniess. He enjoyed watching and attending sporting events for the Ravens, Purdue University, Notre Dame University, University of Maryland, Clarksburg High School and Pen Argyl High School. Roger was an armchair contestant on many game shows including The Price is Right, Wheel of Fortune and Jeopardy. He could often be heard shouting out the correct answer way before the fool on TV could. His greatest past time was spending time with his family. He leaves behind sister-in-law Pam (Tom) Lewellen, mother-in-law Joy Smith and sister-in-law Debbie (Gary) Sams, along with family mentioned above and many nieces and nephews, great nieces and nephews, countless friends, co-workers, neighbors and acquaintances - too many to name. Just know that he loved you and valued your relationship. His family held a bedside ceremony immediately after his passing. A memorial service for friends and family will be held back in Indiana at a later date. The family asks that in lieu of flowers that donations be made in memory of Roger to the Marine Toys for Tots. His love of children and the holidays will be exemplified by this gesture. Roger was preceded in death by his parents and father-in-law John Threlkeld, mother-in-law Shirley (whom he adored) Threlkeld, father-in-law Edward "Brownie" Smith, sister Dinah Aquilla Rose, sisters-in-law Nancy Abel, Gloria Richardson, and Peggy Walker, brothers-in-law Roger Threlkeld and John Ferguson, nieces Heather Ferguson and Linette Richardson Verbeck. We will miss everything about you: the dad jokes, pulling your finger, the honking and waving at open fields, the nah nah nah nah nah nah nah nah nee, being a coach on and off the field, your laugh, your smile, your hugs. We'll cherish our times together and keep your memory alive so that the grand-kids will always know the man you are.

Roger Linn Rose passed away Saturday morning, November 16, 2019 in the arms of his wife, Sherry Rose, of 53 years. He died in the VA Hospital of Lake Nona in Florida. He had not been in the best of health for many years having survived a massive... View Obituary & Service Information

The family of Roger L Rose created this Life Tributes page to make it easy to share your memories.

Send flowers to the Rose family.