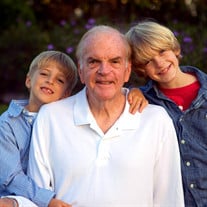 Roger Allan Lewis, age 82 passed away peacefully from congestive heart failure at his residence in St. Cloud, Florida on Saturday, June 8, 2019. Roger was born in Cherokee County, Texas to Allen and Nell Lewis, an accountant and school teacher. He lived most of his childhood in Corpus Christi, Texas and graduated from W.B. Ray High School. He later received his law degree from the University of Texas at Austin in 1961. Roger married Carole Saucier and moved to Houston and had two children, Melissa and Allan. From 1976-1980, they served as missionaries to Bogota, Colombia with the Foreign Mission Board and added to their family, a girl named Alicia. Upon returning to the United States, they divorced in 1985. Besides the stint as missionary, Roger dabbled in finance, real estate and business. He later had a brief marriage from 1994-2001 to his second wife, Jackie Miller Phillips. Roger retired and moved to Florida in 2016 to be near his daughters. Roger had four passions: day-trading, alternative medicine and health cures, self-actualization techniques and studying the Bible. He valued education more than anything and had a myriad of books, certifications and courses in the stock market, vitamin supplements and Emotional Processing Theory. He was constantly learning more and more, and able to converse about many subjects. He was known for his friendliness, handing out gospel tracks and telling stories, Paul Harvey style. His life taught us that family and people are more important than any amount of money you can make. Roger was preceded in death by his younger brother Fred Lewis and his second wife Jackie Phillips. He is survived by his three children, Melissa Immel, Allan Lewis and Alicia Luna; His son-in-laws, John Immel and John Luna; His seven grandchildren, Isaiah and Noah Immel, Josh, Seth and Tyler Lewis, and Alexis and Aliya Luna; as well as his dedicated friend, Betty Lou Wahlstedt. Roger will be buried in a family plot in Jacksonville, Texas in the fall of 2019. In lieu of flowers, donations can be made to One Blood – www.oneblood.org.

The family of Roger Allan Lewis created this Life Tributes page to make it easy to share your memories.

Send flowers to the Lewis family.