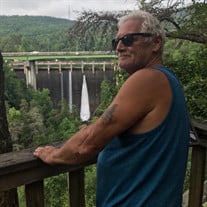 On Tuesday, June 23rd, 2020, Robie William Sokolow, loving husband, father to his only son, and grandfather of two boys, passed away suddenly at the young age of 64. Robie was born on June 4th, 1956 at Fort Dix, NJ to Robert and Colletta Sokolow, and was raised in Marina, California. On July 1st, 1978 he married Christine Bretiweg, together they raised their son Benjamin. Robie joined the Military in 1974 and was stationed in Germany where he later joined Lockheed Martin and remained in Germany with his family until their move to Florida in 1986. Robie retired at age 62 from a long career as a mechanical technician and was ready to enjoy the Florida Lifestyle. His favorite place was at home by the pool and the Tikibar that he single-handedly built in his family's backyard. There he would love to gather friends and family to cook and enjoy each other's company. Through his professional career he held many titles, but was most proud of his time with Lockheed Martin where test firing rockets became his new passion. He would tell many stories about it to anyone who would listen. His wit was legendary, making friends and family laugh with his hilarious comebacks and smart alec comments. Robie's life was cut short with so much he still wanted to accomplish, like restoring his motorcycle that was as unique as Robie's personality. If someone wasn't sure if they had met him, the response would have been: If you met him you would surely remember. Always perceived as a tough guy, but close friends and family knew of his consistent genuine spirit. He would, without hesitation, drop what he was doing to help and support as best as he could and you could always count on him to be there for you. Retirement also meant having the joy of spending more time with his grand kids, swimming with Kane and practicing Knox's baseball swing. Robie was the family's rock, the person to go to , who always knew what to do in every situation and he will be missed dearly. Robie was preceded in death by his father Bob, his mother Kelly, and sister Cindy. His memory lives on through his wife of 42 years, Christine, his son Ben, daughter-in-law Jerica and his grand kids Kane Benjamin and Knox Robie as well as his extended family in California and Germany. According to his wishes, we will not hold a traditional service, but instead have a "Cheers to Robie" gathering at the Tikibar with a date to be later announced.

On Tuesday, June 23rd, 2020, Robie William Sokolow, loving husband, father to his only son, and grandfather of two boys, passed away suddenly at the young age of 64. Robie was born on June 4th, 1956 at Fort Dix, NJ to Robert and Colletta Sokolow,... View Obituary & Service Information

The family of Robie William Sokolow created this Life Tributes page to make it easy to share your memories.

Send flowers to the Sokolow family.