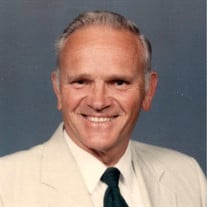 Robert John Smith, Sr, 91, went to be with Jesus on Sunday, August 20, 2017. Born and raised in Okmulgee, OK, he graduated from Okmulgee High School in 1944. He graduated from Roberts Wesleyan College in 1948. He got his Bachelor’s degree in Education from Northeastern State University in 1962 and his Master’s degree from Ohio University in 1967. He contracted polio when he was one and was thus classified as 4F during WWII, working at Kaiser Shipyard as a draftsman instead. He worked as a cost accountant, school teacher, and public school guidance counselor at different times throughout his life. He had an ability to take something broken and make it useful again. He also designed numerous items to make processes more efficient. He loved woodworking, designing and creating a variety of useful items. Robert met Irene Dorothy Frisbie in New York and married in 1950. They were married 67 years. He was a Christian, professing Christ as his Savior when a teenager, instilling in his family the importance of going to church and doing what was right. He was a faithful husband and father, enjoying numerous pastimes with his children and grandchildren. Besides Irene, he is survived by his five children, Robert Smith, Jr (Sherry) of Pepper Pike, OH; Donna Bruce (Harold) of King William, VA; Sharon Matthews (Allen) of Kent Island, MD; David Smith of Maui, HI; and Janell Stought (Todd) of St Cloud, FL. Robert had fifteen grandchildren and ten great-grandchildren. A Celebration of Life service will be held at Grace Community Church located at 5501 E Irlo Bronson Memorial Highway, St Cloud, FL, 34771 on Wednesday, August 23 at 7 pm. Donations in lieu of flowers can be made to the Grace Community Church building fund.

Robert John Smith, Sr, 91, went to be with Jesus on Sunday, August 20, 2017. Born and raised in Okmulgee, OK, he graduated from Okmulgee High School in 1944. He graduated from Roberts Wesleyan College in 1948. He got his Bachelor&#8217;s... View Obituary & Service Information

The family of Robert John Smith Sr. created this Life Tributes page to make it easy to share your memories.

Send flowers to the Smith family.