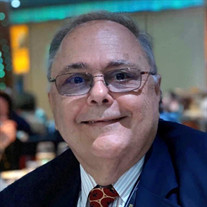 Robert J. Matusevich, 68, passed away on March 31, 2020 at Poinciana Medical Center. Born in the Bronx, New York on July 29, 1951, he grew up in Queens, New York and later moved to New Jersey. He graduated from Fairlawn High School and went on to the New Jersey Institute of Technology where he received a Bachelor of Science degree in Computer Science. Robert began a ¬¬23-year career with General Reinsurance Corporation where he served as Second Vice President. He married Janice Bernard in 1976, and they moved to Stamford, Connecticut. Robert later became the Director of Office Automation for Fleet Bank and East Greenwich, Rhode Island became their new home. After retiring in 2001 they settled in Winter Garden, Florida and later moved to Solivita in Poinciana, Florida. Robert had many talents—a gifted engineer, he could build, remodel, do plumbing and electrical work, lay flooring, build decks, and more. He gladly volunteered to help friends and family with their many projects. In retirement, he became an accomplished cook and gardener. The fruits, vegetables and herbs he grew added to his recipes. He was most generous in sharing meals with friends and family. Robert enjoyed travel, especially cruises; trips to the beach at Long Beach Island in New Jersey; and just about everything at Disneyworld. He would probably consider being GrandBob to Mikaela as his greatest accomplishment. He will be deeply missed by his loving wife of 43 years, Janice; his son, Robert J. Matusevich Jr and his wife, Jordyn; and the joy of his life, granddaughter, Mikaela Matusevich. He is survived by his sisters, Nancy Matusevich and Joan Vaccaro, nieces and nephews. He was predeceased by his parents, Felicia and Joseph Matusevich, and his brothers, Alex and Ronald Matusevich. There will be a Celebration of Life at a later date. Robert felt strongly about supporting veterans, so in lieu of flowers, the family suggests donations be made to Fisher House in his name. This organization provides housing for veteran’s families while a loved one is receiving medical treatment. Please contact fisherhouse.org or orlandofisherhouse.org to make contributions.

Robert J. Matusevich, 68, passed away on March 31, 2020 at Poinciana Medical Center. Born in the Bronx, New York on July 29, 1951, he grew up in Queens, New York and later moved to New Jersey. He graduated from Fairlawn High School and went... View Obituary & Service Information

The family of Robert J. Matusevich created this Life Tributes page to make it easy to share your memories.

Send flowers to the Matusevich family.