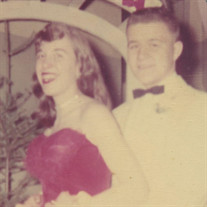 Robert (Ted) Leonard Hamlin, Jr., 77 years young, passed on Saturday, May 25, 2019, with his loving wife, Hildred, of fifty-nine years, at his side. Robert was born on January 9, 1942, in Waterville, Maine, the eldest child of Robert and Marionette... View Obituary & Service Information

The family of Robert "Ted" Hamlin Jr. created this Life Tributes page to make it easy to share your memories.

Send flowers to the Hamlin family.