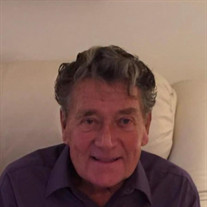 Shield’s tuneup shop, in Summit, Illinois, was one those businesses that functioned as a full-service stop—a place for regulars to fix their Ford and shoot the breeze, ideally with its reputable proprietor: a bronze man with quick humor and Old Hollywood good looks, who wore 1950s-style black Levi’s and white tees with rolled sleeves across the decades, who, in fact, appeared to age at a fraction of the normal rate. And so it is fitting that the new owner of the building that used to house Shield’s just bricked up its garage doors this January, on the week Bob passed. Robert Gibson was born in 1928, a couple of a days before Valentine’s, in Argo. He was the eldest child of George, a mischievous pot-stirrer, and Alice (née Anderson), a petite firecracker. Bob’s mother introduced him to Louise before he left for Occupied Japan, where he served as a sergeant with the military police, and upon returning to his hometown, he picked a tie printed with roses when he and Lou eloped in 1949. (Their children Peggi and Bobby, Jr. came in the sixties.) Bob worked nights at Corn Products, then hopped a bus to State Street in the morning to attend automotive school. At the time, Shield’s—at 5739 South Archer Road—was brand-new and faced a prairie, and Don Shield hired the then 23-year-old grease monkey at the insistence of locals whose cars he’d fixed, ultimately selling the shop to him in the early ’50s. “Everyone knew Bob,” says IPM founder Rich Pinnico, his dear friend of nearly 40 years. “Politicians, law enforcement. He was known as the absolute best. His customers were customers for life—because of the high-quality work but also his friendly mannerism and total decency.” Denise O’Connell, who trained at Shield’s, and worked there for two decades, adds, “Put it this way, if you didn’t have the money to fix your car, it would be fixed. He’d just say, ‘Pay me when you have it.’” “He trusted people,” says his niece Carol Akin Rehr. “How could you not love him?” she asks, citing his combo of good nature and good looks. Bob carried pocket combs (and his full head of brown hair, which finally did gray) until the end. “I don’t think I ever saw him with messy hair,” Vicki Johandes Turen, who grew up next door, admits with a laugh. “All those cars with no roofs, and perfect hair.” For the fun of customers, Bob staged the shop’s small office with antiques: a turn-of-the-century camera; a roll-top desk; a stuffed Jolly Green Giant mascot; a cast-iron mantle clock that he’d found in pieces in a barn and puzzled into working order. Much of the office’s other stuff had been salvaged from the city dump, where Bob and his close police officer friend Eddie Hedlund used to go after rats with riffles for target practice. “I knew more people through that shop…,” says O’Connell. “I don’t care where I was at, someone would come say hi to me.” Bob collected antique American cars, some of which he restored (and kept, or flipped), some of which are still waiting to be found in garages throughout Greater Chicago. On visits from Florida, when his daughter’s children were treated to rides in the rumble seat of his teal 1929 Model A, they felt like they were with the mayor—who could drive Chitty Chitty Bang Bang cars, yodel, wiggle his ears (thanks to eating plenty of carrots), and somehow hear the elusive birds called snipes. He favored gardening, sunbathing, long-distance roadtrips, and fishing excursions to South America, where he once sat on an anaconda (mistaken for a tree stump) and once watched a native fisherman escort an enormous live catfish upstream on a leash of rope (they were headed to the market). Those fishing holidays were untaken with his pals Drs. Olson, Bolino, and Razim, two GPs and an ENT, respectively, who called their companion—specialist of the insides of their cars and boats—“Dr. Gibson.” On one trip, after some hours, Bob reeled in a tarpon from the waters off Casa del Mar, Costa Rica: this he mounted on the back wall at Shield’s, and secretly used as a bank for hundred-dollar bills. In one of hundreds of stories, some well-connected locals were meant to play a big card game on a luxe bus, but it had inopportunely broken down. Bob received an urgent call, asking him to come fix the vehicle, which he declined to do, because he only wrenched cars (and the occasional boat): The guy said, “You don’t understand—this bus belongs to Evel Knievel!” “Well,” Bob replied without hesitation, “I still don’t work on buses!” Bob’s passing was preceded by his younger sisters Francis Gott and Deloris O’Brien, his wife Mildred Louise Gibson (née Garmon), and his grandson Dustin Tattoli (Inés Gómara Tattoli). He is survived by his daughter Peggi Tattoli (Cory Tattoli) and son Robert Gibson, Jr. (Heather Kevin); his grandchildren Chantel Tattoli (Andrew McClure), Chiffawn Reilly (née Tattoli, Michael Reilly), and Angelina Gibson; and his great-granddaughter Céleste McClure, whose middle name Roberta is the feminine of that of her late uncle’s, which is after—you got—“Bob.” In lieu of flowers, please donate in his name to Bridgeview Church of God, at 7801 W. 71st Street, and whenever you see a neat antique American car on the road, smile and wave.

Shield&#8217;s tuneup shop, in Summit, Illinois, was one those businesses that functioned as a full-service stop&#8212;a place for regulars to fix their Ford and shoot the breeze, ideally with its reputable proprietor: a bronze man with quick... View Obituary & Service Information

The family of Robert Gibson created this Life Tributes page to make it easy to share your memories.

Shield’s tuneup shop, in Summit, Illinois, was one those businesses...

Send flowers to the Gibson family.