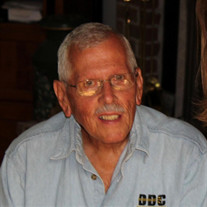 Dr. Richard H. “Dick” Martin, of Saint Cloud FL, passed away, surrounded by his family, on December 2, 2018. Dick was born on February 16, 1939, in Bluefield WV to the late Lucille (Weatherford) and Stanley Martin. He attended Bluefield high school, and then furthered his education at Concord College, and West Virginia University, where he completed his Bachelors of Science, Master’s Degree, and Ph.D. all in the field of Geology. In his younger years, Dick participated in high school athletics: football, basketball, and track. He was on Concord College’s track team as a high jumper. Dick began his career as a Geology Professor at Campbell College, in Buies Creek, NC. He spent most of his career working in the Oil and Gas Industry in WV and PA. His work as a Geologist took him to many places including the Gulf Coast of Texas and the oil fields of Alaska. After retirement, he lived in Southport NC, where he enjoyed fishing, boating, landscaping, and spending time his family. He recently relocated to Saint Cloud FL to live closer to family. He was a loving husband, brother, father, and grandfather. He was preceded in death by his parents, brother Stanley, and sister Ann M. Carter. He is survived by his wife, of 57 years, Sara Ann (Cook) Martin; his three children and their spouses, Lisa and Kevin Reed of Winchester, VA, Richie and Lori Martin of Morgantown, WV, and Karen and Jason Veit of Orlando, FL; his four grandchildren, Lauren and Erika Reed, Jacob Martin, and Sarah Veit; his sister and her spouse Marilyn and Jim Curtin of Smithfield, VA; 2 nephews, 3 nieces, and cousins. In Lieu of flowers, memorials may be offered to Central Florida Children's Home, 12569 Narcoossee Rd, Orlando, FL 32832, or the charity of your choice.

Dr. Richard H. &#8220;Dick&#8221; Martin, of Saint Cloud FL, passed away, surrounded by his family, on December 2, 2018. Dick was born on February 16, 1939, in Bluefield WV to the late Lucille (Weatherford) and Stanley Martin. He attended Bluefield... View Obituary & Service Information

The family of Richard H. Martin Sr. created this Life Tributes page to make it easy to share your memories.

Send flowers to the Martin family.