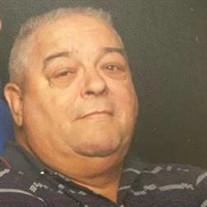 Richard Gustave Fournier 06/09/1947 - 11/06/2021 Richard Gustave Fournier was born on June 9th, 1947 in North Adams Massachusetts, to Adrian Fournier and Marguerite Couture Fournier. He died on November 6th, 2021 in Orlando Florida at the age of 74. At the time of his passing, Richard resided in St Cloud, Florida with his surviving wife of 54 years, Nancy Venice (McNicol) Fournier. Richard is also survived by two children: Sherry Woltering and Fiance Jose, and James Fournier and wife Brandy, 4 grandchildren: Zachary Woltering and wife Genesis, Anthony Fournier and fiance Kelci, Brittany Fournier, and Ashley Fournier, and a great-grandchild: Melody Fournier. Richard is further survived by three sisters: Laurette Desormeaux and husband David, Suzanne Johnson and husband Richard, and Alice Racette and husband David, brother-in-law Gilbert McNicol, two sisters-in-law Beth McNicol and husband Brian Pliska and Peggy McNicol and Partner Beth Stoddard.,15 nieces and nephews and many great-nieces and nephews. Richard is preceded in death by his parents, sisters Rita Guth and her husband William Guth, Stella Beaudin and her husband Vincent Beaudin, and brother-in-law Alexander McNicol. Richard attended St. Joseph's grade school and graduated from McCann Technical High School in 1966. Richard worked for Hunter's Machine Shop and at Williams College as an electrician. Richard was proud of his service in the Williamstown Volunteer Fire Department. Richard and Nancy moved to Florida in 1986 where Richard was a Master Electrician for Central Florida Electric until his retirement in 2001. Richard enjoyed playing the guitar and mandolin, golfing, camping, square dancing, and football - Go Patriots! Most of all Richard took great pride in his children and grandchildren and spending time with his family and friends. Richard was dependable, hard-working, and always there to lend a hand, but mostly, he was fun-loving with a great sense of humor. This obituary cannot touch on all the ways Richard loved and was loved, he was a wonderful Friend, Son, Brother, Husband, Father, Grandpa, Great Grandpa, and uncle. He touched the lives of so many and will be deeply missed. A celebration of his life will be held on Saturday, November 13th, 2021 from 4 pm to 8 pm at Fisk Funeral Home, 1107 Massachusetts Ave, St. Cloud FL 34769 In Lieu of Flowers, donations may be made to The American Heart Association or the National Diabetes Association.

The family of Richard Gustave Fournier created this Life Tributes page to make it easy to share your memories.

Send flowers to the Fournier family.