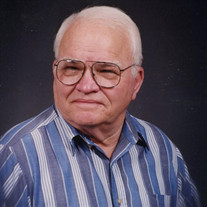 Reidy A. Williams, Jr. of St. Cloud, Florida, went to his Heavenly home to be with Jesus on April 23, 2019, at the age of 89. He is survived by his wife Mildred, younger brother Wofford O’Sullivan Williams, and his four married children and their spouses – Reidy III and Caron Williams, Bobby and Jessie Williams, Caroline and Tom Butner, and Barry and Dana Williams. Reidy has eight grandchildren and one great granddaughter. Reidy is a 1952 graduate of The Citadel – Military College of South Carolina, and served in the Air Force as First Lieutenant during the Korean War and was stationed on the island of Cho-do as a radar installation officer. After his military service, Reidy made his career with Southern Bell Telephone and AT&T while living in Indian Harbor Beach, Florida, where he raised his four children. During those years, he was actively involved in many community activities. He served as City Commissioner, actively involved in the Kiwanis Club and truly loved sports, volunteering as a high school football and wrestling referee and baseball umpire. In addition, Reidy was instrumental in organizing the local volunteer fire department, and served on the Melbourne Airport Authority. In 1976, Reidy and his family moved to St. Cloud, Florida, where he later served as County Commissioner of Osceola County for four years. After his retirement, Reidy and Mildred started a successful rental business which is currently managed by their two sons, Bobby and Barry. As much as we will miss our precious husband, father and Papa, we receive peace in knowing we will be together again one day. Celebration of life will be held on Saturday, May 11, at Fisk Funeral Home, 1107 Massachusetts Avenue, St. Cloud, Florida. Visitation with the family will be held from 12:30 – 1:30 p.m. with a memorial service starting at 1:30 p.m. In lieu of flowers, donations may be made in Reidy’s memory to Champion Baptist Church building fund, 303 Commerce Center Drive, St. Cloud, FL 34769.

Reidy A. Williams, Jr. of St. Cloud, Florida, went to his Heavenly home to be with Jesus on April 23, 2019, at the age of 89. He is survived by his wife Mildred, younger brother Wofford O&#8217;Sullivan Williams, and his four married children... View Obituary & Service Information

The family of Reidy A. Williams Jr. created this Life Tributes page to make it easy to share your memories.

Reidy A. Williams, Jr. of St. Cloud, Florida, went to his Heavenly...

Send flowers to the Williams family.