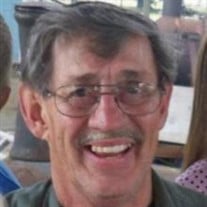 Ray E. Hayes, passed away on Monday, October 12, 2020 at 69 years of age. He was born on May 30, 1951, in Kissimmee, Florida to Henry “Gene” and Ruby Hayes. Ray graduated from St. Cloud High School and was a very proud electrician and life-long member of IBEW, Local Union 606. Ray was a lover of fishing with his brothers, gossiping with his sisters, hunting with his brother in laws, singing old songs whenever a good one popped in his head, dancing around with his famous moves and telling jokes to anyone who would listen, including strangers passing by. His wife, Billie, was the love of his life, his children made him happy and his grandchildren made him even happier. He was preceded in death by his parents, Henry and Ruby (Sweat) Hayes, Sister Ruby Gene Hayes, Brother Bobby Hayes, Son-in-law John Burrows and beloved dog and best friend Pooh Bear. Ray is survived by his loving wife Billie (Arnold) Hayes and children Shawn (Mike) Baker of Okeechobee, Fl., Trevor Deane of Palm Bay, Fl., Courtney (John) Hayes-Burrows of Macon, Ga., Brandi (Tony) Wells of Kenansville, Fl., and Ray “Boomer” Hayes of Palm Bay, Fl. He was very proud of all eight of his grandkids Wesly “Gage” Bearden, Carlee Bearden, Tyler (Courtney)Pace, Tucker May, RheAnna May, Nathaniel Thomas-Wells, BryLeigh Wells and Nathan “Colt” Baker. He is also survived by brother Johnnie Hayes of St. Cloud, Fl., sister Ann Carol (Bill) Hughes of Elkmont, Al., sister Lillian (Jerry) Demming of Ocala, Fl., sister Joyce (Darcy) Shuart of Ocala, Fl., twin sister Fay (Rufus) Spotz of St. Cloud, Fl. and brother Jimmy Hayes of St. Cloud, Fl., several nieces and nephews as well as a large extended family. One last joke for the grandkids: If an egg and a half, cost a penny and a half, how much would a dozen and a half cost? Visitation will be held at Fisk Funeral Home, Monday, October 19, 2020 from 11:00 a.m. – 1:00 p.m., with Funeral services at 1:00 p.m.

The family of Ray E. Hayes created this Life Tributes page to make it easy to share your memories.

Send flowers to the Hayes family.