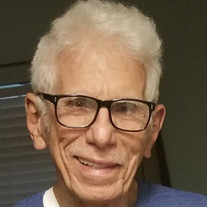 The oldest son of nine children, Ralph Gonzalez was born September 8, 1930 in Tampa, Florida to Dulce Maria and Rafael Gonzalez, and died peacefully in his home April 27, 2019, surrounded by family and music. His beginnings were somewhat treacherous, as his father was blacklisted for attempting to unionize the cigar-making industry in Tampa, and so he moved to the projects of New York in search of work. They grew up poor, and he met his wife, Julia, in the neighborhood when they were 14. They married when they were 18, and he remained a devoted husband for 67 years until Julia’s death February 15, 2016. He was a fiercely independent man. He lifted his family out of poverty against all odds, as he suffered the same fate as his father when he attempted to unionize Coca-Cola in Miami, and was blacklisted for his efforts. He worked two to three jobs at a time for years until he was hired by the US Post Office as a letter carrier. He became a union shop steward and rose to become vice president of his local union. He retired when he turned 64, passed his GED, and became an elementary school substitute teacher for 8 years. He loved to travel and was an avid reader and life-long learner. He was a dedicated father, loved and respected by his surviving children; Ernest, Linda, Daniel, and Gary. He was a proud grandfather, adored by his 9 grandchildren; Victoria, Marcie, Chris, Steve, Annie, Daniel, Sarah, Joe, and Emily. He was a loving great-grandfather to his 9 great-grandchildren; Madison, Naomi (Aiyannah), Noah, Lily, Anna, Ayvah, Lydiah, Luna, and Moira. He is also survived by two of his brothers and three of his sisters; Richard (with whom he remained close to the end), David, Mary, Virginia, and Dolores. He lived a full, courageous life and went out on his own terms. The day before he had his final stroke, he told his son, Daniel, that he was tired of being dependent on others for his care. His final week included visits from many family members and friends, wonderful hospice care and guitar serenades. His passing was gentle. We will miss him greatly. In lieu of flowers, the family is requesting a donation be made to Vitas Hospice Care in his name. https://interland3.donorperfect.net/weblink/weblink.aspx?name=E232399&id=1

The oldest son of nine children, Ralph Gonzalez was born September 8, 1930 in Tampa, Florida to Dulce Maria and Rafael Gonzalez, and died peacefully in his home April 27, 2019, surrounded by family and music. His beginnings were somewhat treacherous,... View Obituary & Service Information

The family of Ralph Gonzalez created this Life Tributes page to make it easy to share your memories.

Send flowers to the Gonzalez family.