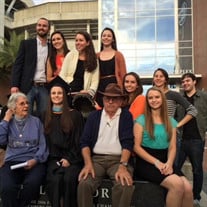 Quintilla Wray Markley, devoted wife, mother and grandmother, died peacefully in her sleep Sunday, January 28 at Good Samaritan Village in Kissimmee, Florida. Born in Warsaw, Missouri, Quinn, as her family would call her, graduated from college with a Bachelors in Nursing and would one day treat visitors from across the globe as a nurse for Walt Disney World. Quinn married her husband Jay Markley, in 1955 and shared 63 years of marriage together. She is survived by her husband and four children: Jaqui Griffith of Tallahassee; Jene Morgan of Kissimmee and her husband Jon; Jeff Markley of St. Cloud and his wife, Diane: Judy Markley Williams of Kissimmee. She is also survived by her brother Samuel Wray and his wife Hilde of Coal Valley, Illinois. Quinn’s prized legacy includes her nine grandchildren, Andrea Morgan-Campa, Craig Morgan, Melissa Morgan, Scott Griffith, Jennifer Griffith, Tiffany Markley, Katie Markley, Kearston Williams and Savannah Williams. Her grandchildren were her greatest joy, and she would often be seen at the pool side or on the court or ball field cheering them on and giving post-game hugs. When not cheering her children or grandchildren, Quinn would play host to regular camping trips with the family. Nestled around the campfire, she would challenge anyone to a game of hangman or scrabble. She was an avid volunteer with the American Red Cross and she was instrumental in establishing the senior volunteer program for the Osceola County chapter (now Greater Orlando). A private family service is planned later in the Spring, where her life will be celebrated around a campfire with games, songs and stories filled with laughter and joy. Quinn Wray Markley was 84 when she was called home to be with her earthly parents, Harold and Edith Wray and her heavenly father.

The family of Quintilla W. Markley created this Life Tributes page to make it easy to share your memories.

Send flowers to the Markley family.