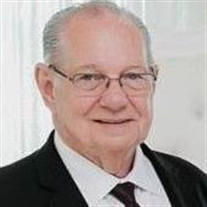 Paul Francis Gatley, Sr., 77, of St. Cloud, FL, passed away on June 18, 2021, in Advent Health Celebration Hospital, Kissimmee, Florida. Paul was born in Philadelphia, PA to Francis and Gertrude Gatley on March 3, 1944. He married his beloved wife Louise Carlson on September 18, 1965, in Philadelphia, PA. Paul is a veteran of the Vietnam War and served in the Army Reserves. Paul began his railroad career with the Penn Central Transportation Company December 7, 1972. Paul was hired by National Railroad Passenger Corporation/Amtrak after its formation. Paul held many positions from the east coast to the west coast and back, including Dispatcher, Chief Dispatcher, Phila., PA, and Balti., MD; Superintendent of Operations, Peninsula Commute Service, San Jose, CA; Director Operation Support, Emeryville, CA; Director Manpower Utilization, Wilmington, DE. Paul retired in December 2002 and moved to Florida. In retirement Paul worked sixteen years, part time for Pep Boys, Kissimmee, Florida. Paul enjoyed encouraging those around him to achieve their best, not to be afraid of risk, plan for their future and always “believe in yourself”. Paul always put his family first and will be remembered as a kind man who always welcomed you with a smile, a firm handshake and someone who would always look to pass on helpful knowledge and advice. Paul is preceded in death by his parents, Francis Gatley, Sr. and Gertrude Gatley. Paul is survived by his beloved wife, Louise Gatley, his children, Paul Gatley Jr. and Louise Quasney, their spouses, Peggy Gatley and Kurt Quasney, Sr., his brothers and sisters, Mary Gallagher, Francis Gatley Jr, Anne Wilt, John Gatley and his Grandchildren, Kurt Quasney Jr, Paul Gatley III, Benjamin Quasney and Great grandchild, Anthony Quasney. A celebration remembrance will be planned in the upcoming months. At the Families request Donations may be given in Paul's name to Tunnel to Towers at t2t.org or The Wounded Warrior Project at woundedwarriorproject.org.

The family of Paul Francis Gatley Sr. created this Life Tributes page to make it easy to share your memories.

Send flowers to the Gatley family.