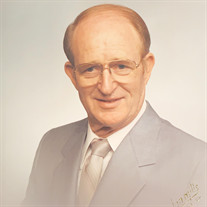 Myron Douglas Sartin redeemed the promise given him years ago. On Saturday, December 21, 2019 he entered glory at the age of 92; visiting family and walking streets of gold. He passed away peacefully at home, with his wife of 68 years, Betty Sartin and his family by his side. He was surrounded and cared for by his three children and son-in-law in the hours and days before his passing. Myron was born to Floyd Elmer Sartin (F.E. Sartin) and Vela Grace (Boyd) Sartin at home August 27, 1927 in Jayess, Mississippi. He was premature at birth, so small that the doctor was concerned that he would not live and did not issue a birth certificate. Vela and Floyd put him in the oven as a makeshift incubator. As a child, Myron spent his days working with his family on their farm and picking cotton. He had many fond memories of time with his brother. They often would create mischief, tormenting cats and roosters. It was during this time that he also developed a great love for his mother’s homemade biscuits. A love that would later become an art and gift to many that graced his table for breakfast over the years. Due to Osteomyelitis he contracted as a boy, he was disqualified to serve in the military during World War 2 or Korea. In high school, he drove a school bus in his county. He later moved to Nashville, TN to attend Trevecca. It was there that Myron met his wife, Betty Lee Ham while she was visiting friends at the campus. They started dating when Myron moved to Union, Missouri and began working for Betty’s father running telephone lines throughout the mid and southwest as a lineman. Myron and Betty married March 24, 1951 in Union, MO. They went on to have four children. Myron was an ordained minister in the church of the Nazarene. He served 60 years and ministered to congregations in Des Arc, Missouri; Bellville, Illinois; Wright City, Missouri; Magnolia, Mississippi; Selma, Alabama; Spencer, Indiana; Tuscaloosa, Alabama and St. Cloud, Florida. In addition to being a minister of the gospel, Myron shared various side jobs over the years. In Indiana, he worked and served the West and Perish funeral home, driving the ambulance and serving families. He also spent time driving a school bus and helping local farmers during harvest season. Throughout his life, whenever a need arose, Myron was there to help; no matter the person or situation. He loved people. In addition to being a dedicated and loving husband and father, Myron loved studying God’s word. He could be found everyday early in the morning in his study, reading his bible and Barclay commentaries and praying. His prayer life was a dedicated part of his walk. Many family have fond memories of him gathering hands around the table before a meal, to pray over each family member. Myron also loved gardening. His faithful stewardship of life could be seen in his friendships as well as the gentle and diligent way he cared for his flowers, garden and home. Everything he encountered or touched, rather soul or possession, was lovingly cherished. Myron never met a stranger. He had the unique ability to create conversation and connection with every person that crossed his path. His smile was warm and his laugh was inviting. Throughout his life, he held an unwavering faith in God, which he shared with all those who surrounded him. It was Myron’s greatest desire that all would know and love his Savior. Myron joins his parents Floyd Elmer Sartin (F.E. Sartin) and Vela Grace (Boyd) Sartin, his son Myron Douglas Sartin Jr and his granddaughter Leah Dawn Freeman in Heaven. He is survived by his wife, Betty Lee Sartin of St. Cloud, Fl. His children : Mark Dean Sartin of Lake Alfred Fl., Maurice Dwayne Sartin (Karen) of Franklin, Tn and Myra Dawn Woods (Dennis) of St Cloud Fl. His grandchildren: Megan Reyes, Daniel Sartin, Matthew Sartin, Rhea Ward, Nathan Woods, Caleb Woods and Miller Sartin Eight great grandchildren: Ethan, Erin, Elliott, Eliana, Emma, Emerson, Griffin and Evey Brother: James Obed Sartin (Barbara) Shelbyville, Indiana.

Myron Douglas Sartin redeemed the promise given him years ago. On Saturday, December 21, 2019 he entered glory at the age of 92; visiting family and walking streets of gold. He passed away peacefully at home, with his wife of 68 years, Betty... View Obituary & Service Information

The family of Myron D. Sartin created this Life Tributes page to make it easy to share your memories.

Myron Douglas Sartin redeemed the promise given him years ago....

Send flowers to the Sartin family.