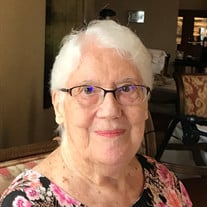 Margaret "Peg" Brach Cleveland, born October 9, 1932 to George and Louisa Brach, passed away October 14, 2019. Born in Wallkill, NY, Margaret currently resided in Kissimmee, FL. Margaret is preceeded in death by her husband, Jack Cleveland. She is survived by her children; Karen L. Kehler, Georgia G. Pizzarelli, and Rhonda Meyers. Margaret is also survived by two siblings, Carol Thom and Jim Brach, along with her grandchildren and great grandchildren. Margaret completed her RN education at Newburgh Nursing School and later became certified in Geriatric Nursing Care that led to the Director of the nursing home at Castle Point, VA. hospital,Beacon, NY, until retirement. She was an active member and held leadership positions in numerous organizations including: Ulster County Girl Scouts, Shawangunk Dutch Reformed Church – later Lake Como, FL Methodist Church, Shawangunk Historical Society, Shawangunk Women’s Quilting Club, Orange County Square Dancing Club, Wallkill –Borden Library, Meals on wheels, Board member of the Booster Club, earning a “Citizen of the Year” award in Ulster County, NY. She was known for her sewing, Square dancing, cooking, quilting and computer skills and instruction in all of them, even teaching the nursing staff at Castle Point VA hospital, everything from how to use the “new computers” to the start of electronic medical records in the early 80’s. If her hands weren’t busy, or not in front of a computer screen, then she was reading and participating in book discussions or social gatherings with friends and family. She lovingly cared for her deceased husband, Jack, then her stepmother, Viola, after retiring in Lake Como, FL. then decided to relocate closer to her daughter Georgia, granddaughter Delia, and great grandchildren near Disney World where she enjoyed her independence at Merrill Gardens, Kissimmee, FL for whom she was truly grateful and called her home. As one of the first residents at Volterra/Merrill Gardens she became known as “The Ambassador” which included tours of her apartment that she was so proud of. She has warmed the hearts of so many residents and local friends there. Her daughter Karen shared her enthusiasm for reading as did many of the residents and friends from her neighboring daughter Georgia’s community, Solivita. She savored her private discussions with so many women where they shared how certain books enlightened them. She had such a grace about her. The staff adored her and appreciated her genuine respect for others and her positive view of most situations. Margaret truly appreciated each person’s value. Her family and friends cherished their time with her. She entrusted the book ‘Being Mortal” by Atul Gawande and instructed us to respect her choice to leave “home” with dignity and grace. She is in a beautiful place now and will be sure to get herself assigned to projects as an angel once she settles in to heaven. SERVICES A Memorial Service to honor her life will be held at: Merrill Gardens at Solivita Marketplace, 4602 Marigold Avenue, Kissimmee, FL 34758 between 12:30 -2:30 PM Monday, October 21st 2019.

The family of Margaret Louisa Cleveland created this Life Tributes page to make it easy to share your memories.

Send flowers to the Cleveland family.