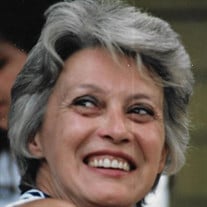 Lucille M (Hill) Kittredge Roussel 87, of Hudson MA. , Hudson NH. and Haines City FL. passed away peacefully in her sleep at the home of her daughter and son in law, after a period of declining health. Lucille was born and raised in Hudson MA., the daughter of Everett and Cordelia “Peggy” (Breault) Hill. Lucille attended school in Hudson graduating from Hudson High school class of 48. Lucille married and raised her family of seven children in Hudson. She worked for many years in a local bank and then as secretary in the office of the Building Inspector for the Town of Hudson MA. before retiring and moving to Hudson NH. In later years Lucille enjoyed being surrounded by her children, grandchildren, and great grandchildren .She enjoyed traveling, time at the beach or at the pool, painting, bird watching, crossword puzzles and her Boston Red Sox. Lucille leaves her daughter and husband Raymond and Kathleen Frank, her son and daughter in law Kevin and Ann (Reske) Kittredge, her son Michael Kittredge and his partner Richard Giannasoli, her son Daniel Kittredge and his partner Heidi Martel, and her son Robert Kittredge. She also leaves her grandchildren Jennifer Burkle, Kelly Kittredge, Kevin Kittredge and wife Kara (Wood) Kittredge, Kristen Kittredge, Nathan Kittredge, Jacob Kittredge, Holly Frank, Michelle (Frank) Egan and husband Anthony, Audrey (Frank) McGowen and husband Andrew, Heather Frank and partner Robert Marszal , Megan Frank and partner Caenon Chu as well as Emily Brazier and her fiancé Kyle Plavcan. Lucille leaves her great grandchildren, Madeline McNeish, Kyle Kittredge, AJ Egan, Saige and Lillian Marszal, and Sawyer Plavcan. Lucille is also survived by her sister and brother in law Mr. and Mrs. Peter and Charlotte “Honey” (Hill) Conti, her niece Cynthia Costabile and husband Joseph and their children, and nephew Peter Conti and wife Maria and their children. Lucille was predeceased by husbands Paul W. Kittredge and Normand Roussel as well as daughters Paula Brazier and Maureen Kittredge. The family of Lucille would like to thank the Fisk funeral home, of Saint Cloud Florida for their compassionate assistance. A celebration memorial will take place at the family’s convenience in Massachusetts.

Lucille M (Hill) Kittredge Roussel 87, of Hudson MA. , Hudson NH. and Haines City FL. passed away peacefully in her sleep at the home of her daughter and son in law, after a period of declining health. Lucille was born and raised in Hudson... View Obituary & Service Information

The family of Lucille Marie Roussel created this Life Tributes page to make it easy to share your memories.

Send flowers to the Roussel family.