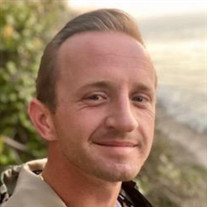 Kenneth Mark Dabrowski, 32, of Saint Cloud, FL passed away on March 11, 2022. He was born on March 20, 1989 to Thomas and Wendy (Mungall) Dabrowski in Amherst, NY. Kenneth was a graduate of Valencia College, Rollins College and Daytona State College. As a young boy, Kenny enjoyed BMX racing, soccer, surfing and fooling around with his brothers. Golfing in a nearby cow field was also a pastime. At the age of 10, after passing the exam he became a USSF Soccer Referee. He refereed for several years for youth soccer games. He also learned to play the guitar and piano. He was a member of St. Cloud Presbyterian Church. He was active with the youth group. He enjoyed the youth Triennium held at Purdue University. He also traveled several times to Puerto Rico with the youth. At 16, he had a neighborhood lawn care business up and running. During his first 2 years at Rollins College, he worked at the school green house which increased his interest and knowledge of plants. As an adult, Ken always arranged a vase or two of fresh cut flowers to brighten his home. Ken was also very good with car mechanics and while attending Daytona State College and working at Bert Fish Hospital, he was continually working on his prized 1978 International Harvester Scout. The engine and wiring were always causing him trouble. He kept very busy researching and repairing. He loved that truck. He kept his recent vehicles spotlessly clean, vacuuming and polishing almost every day. Ken excelled all through school. He asked questions that other students wouldn't. Teachers either loved him or they didn't. He had an awesome almost photographic memory which he said was both a curse and a blessing. While at St. Cloud High School, Kenny also attended TECO where he received his phlebotomy certificate and Valencia Community College earning his AA. He attended Rollins College and Daytona State College. He earned his Associate Degree in Nursing (ASN), a Bachelor Degree of Applied Science in Supervision and Management (BAS-SM) and a Bachelor of Science in Nursing (BSN) all while working full time at St. Cloud Hospital and Bert Fish Hospital in New Smyrna Beach. Kenneth entered the healthcare field as a phlebotomist as soon as he turned 18, while in high school. After becoming an RN, he decided travel nursing was the next phase to try. He researched travel assignments and move to Dana Point, CA,. He shared an apartment with his brother and sister-in-law, Andy and Lindsay. Eventually, Ken moved to San Diego and to various locations in Los Angeles close to his jobs. His last home in California was next to the Pacific Ocean in Rancho Palos Verdes in LA county. As a Critical Care RN, Ken also cared for Chemotherapy and Infusion patients, and was also an OR Circulating RN with a Plastic Surgeon. He was very proud of his accomplishments. He was awarded 3 Daisy Awards during his career which recognizes a nurse providing extraordinary compassionate care. Recently he returned to Florida and begun work at Manada Technologies in Celebration. Kenny was happy to link up with his college roommate and friend, Joey. Ken enjoyed surfing, skateboarding and hiking. His free time was spent outdoors. Nature was always calling him to take a ride to see new places. Always at his side was Luci, his loyal dog. Some of their favorite places in California were Annie's Canyon near Solana Beach and God's Seat in the Santa Monica Mountains. When Los Angeles completely closed due to Covid he explored through out the city taking amazing photos of a city that is rarely empty and quiet. He was an enthusiastic photographer with over 52,000 photos on his phone. He also has gotten over 20,000 views on the photos he posted on Google. Kenneth is survived by his loving family; parents; Wendy M. and Thomas A. Dabrowski; brothers, Erik T. (Jennifer) Dabrowski of St. Cloud, FL, Andrew J. (Lindsay) Dabrowski of Laguna Niguel, CA; nephews, Jake, Nathan and Lukas. Kenny will be missed by his many relatives, friends and colleagues. He joins his 4 Grandparents and Uncle Dennis and many patients that truly loved him as their Nurse. Arrangements are under the care of Fisk Funeral Home and Crematory, 1107 Massachusetts Avenue, St. Cloud, FL 34769. 407.892,2511. www.fiskfh.com A celebration of his life will be planned in the future. In lieu of flowers, contributions to Saint Cloud Presbyterian Church would be appreciated.

Kenneth Mark Dabrowski, 32, of Saint Cloud, FL passed away on March 11, 2022. He was born on March 20, 1989 to Thomas and Wendy (Mungall) Dabrowski in Amherst, NY. Kenneth was a graduate of Valencia College, Rollins College and Daytona State... View Obituary & Service Information

The family of Kenneth Mark Dabrowski created this Life Tributes page to make it easy to share your memories.

Kenneth Mark Dabrowski, 32, of Saint Cloud, FL passed away on...

Send flowers to the Dabrowski family.