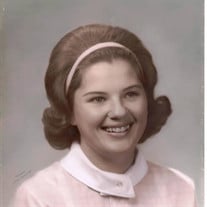 Joyce Castle Nicholson passed away peacefully on April 20, 2020, in Kissimmee, Florida, surrounded by her family. She was born to Gayle Castle and Louise Seyfferle Castle on October 14, 1941, in Dayton, Ohio. She married Curtis P. (Nick) Nicholson in Las Vegas, Nevada, on August 17, 1957. They knew one another for three days when Nick proposed; married a week and a half later; and were married just shy of 61 years. Joyce and her husband Nick were owners of Castle Electric in Westmoreland, Kansas, and did commercial electrical and control work for many years. After retirement, Joyce and her husband moved to Sedgewickville, Missouri, with their son Nick; and then to Kissimmee, Florida, to live with their daughter Kim and son-in-law Cliff. Joyce, along with her sister Pam, started Castle Dance Studio in Oklahoma City, Oklahoma, in 1970, and operated it for three years. Joyce also worked as a proof operator and in telecommunications. Her favorite past-times in retirement were traveling (when she was able), going to casinos to play the slot machines, and spending time with family and friends. She was an avid pet-lover, leaving behind two Pekinese, Bindi and Nikki. She was preceded in death by her parents Gayle Castle and Louise Seyfferle Castle, St. Petersburg, Florida; her brothers Gayle Lee Castle, Las Vegas, Nevada, and Lowell Castle, Davao City, Philippines; and her sisters Beverly Dillon Coquille, Oregon, and Pamela Castle Radasanu, Lake Wales, Florida. A loving mother, grandmother, and great-grandmother, she is survived by her daughter Kim Hund (Cliff) of Kissimmee, Florida; her son Curtis Bret (Nick) Nicholson (Sally) of Dickinson, Texas; three grandchildren Trey Streetman of Paducah, Kentucky, Christopher Young (Shannon) of Topeka, Kansas, and Emily Nicholson of North Carolina; two stepgrandchildren Jennifer Rose (Scott) of Council Grove, Kansas, and Stacy Hund (Amy) of Lawrence, Kansas; six great-grandchildren Aryannah and Nickolys Young, Kolby and Kyler Rose, Laylani and Michael Channel; three grand-dogs Katie, Laci, and Oakley; along with numerous nieces and nephews and their families. Fisk Funeral Home of St. Cloud, Florida, is in charge of arrangements. As per her wishes, Joyce was cremated. Private services will be held at a later date.

Joyce Castle Nicholson passed away peacefully on April 20, 2020, in Kissimmee, Florida, surrounded by her family. She was born to Gayle Castle and Louise Seyfferle Castle on October 14, 1941, in Dayton, Ohio. She married Curtis P. (Nick) Nicholson... View Obituary & Service Information

The family of Joyce C. Nicholson created this Life Tributes page to make it easy to share your memories.

Send flowers to the Nicholson family.