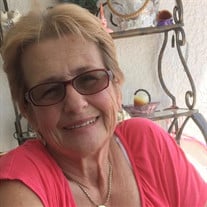 Josephine “Joann” Saelg (Dimesa) passed away peacefully in the home of her son and daughter-in-law on August 28, 2019 at the age of 71. Joann is survived by her loving husband, Walter Saelg; her son, Charles (Denise) Kennedy of Winter Haven, FL, her daughter Carlene (Rita) Davis of McKinney, TX, her daughter-in-law, Becca Saelg of Clermont, FL, her daughter Gina (John) Cohl of Mt. Laurel, NJ, her daughter Stacey (Victor) Huryn of Clermont, FL and her daughter, Tracey Guerrero of Winter Garden; her grandchildren Richard deMalignon, 31, Makaela Stone, 29, Adam deMalignon, 28, Heather deMalignon Smith, 27, Chase Saelg, 25, Cole Kennedy, 24, Jackson Saelg, 13, Olivia Huryn, 12, Mia Gabriella Guerrero, 12, Julia Saelg, 10, Adam Huryn, 10, and Ben Huryn, 8; her great grandchild Emma Smith, 3; her siblings, Fred Dimesa, Raymond (Gloria) Dimesa, Tommy (Sarah) Dimesa, Judy (Carl) Leeds, and her brother-in-law, Louis Panico; and her aunt, Frances Chilak. Joann is preceded in death by her parents, Jack Dimesa and Virginia Lombardi Dimesa; her sister Lucille Panico; and her son Steven Saelg. Joann was born on April 30, 1948 in Brooklyn, NY. She married Walter Saelg in 1977 and moved to Manahawkin, NJ where they raised 6 children and she worked as a school bus driver. In 2000, the couple moved to St. Cloud, FL and lived next door to Joann’s brother, Tommy, and his family. Joann kept herself surrounded by her husband, children, grandchildren, extended family and friends. She was an active member of St. Thomas Aquinas Catholic Church and volunteered with the Council of Catholic Women and the Columbiettes. Joann embodied the charity and love of Christ, and she touched the lives of all who knew her. A funeral Mass is scheduled for 1:00PM, September 12, 2019 at St. Thomas Aquinas Catholic Church at 700 Brown Chapel Road, St. Cloud, FL 34769. All are welcome to attend and celebrate Joann's life. Following Mass, there will be a repass at the home of Tommy and Sarah Dimesa. In lieu of flowers, please send donations to Pancreatic Cancer Action Network, https://secure.pancan.org/site/Donation2?df_id=2681&mfc_pref=T&2681.donation=form1 in memory of Joann Saelg. Condolences can be sent to [email protected], or mailed to 9924 Sunny Mews Alley, Winter Garden, FL 34787. The family would like to thank Chuck and Denise Kennedy for the loving caringiving they provided to Joann in her final days.

Josephine &#8220;Joann&#8221; Saelg (Dimesa) passed away peacefully in the home of her son and daughter-in-law on August 28, 2019 at the age of 71. Joann is survived by her loving husband, Walter Saelg; her son, Charles (Denise) Kennedy of... View Obituary & Service Information

The family of Josephine Joann Saelg created this Life Tributes page to make it easy to share your memories.

Send flowers to the Saelg family.