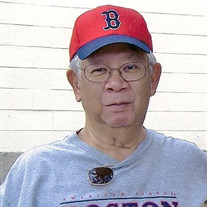 James “Jim” Dong, 83, of Boston, MA, and Celebration, FL, passed away on Tuesday, February 6, 2018. Born in Boston, MA, in 1934. Son of Frank Dong and Susan (Chinn). He leaves his wife Daisy (Yeh) of 55 years, his two children and their spouses Deborah Dong and Charles Dal Corobbo of Chestnut Hill, MA, Jeffrey Dong and Tracy Conway and granddaughter Elise of San Francisco, CA, and his brother and sister-in-law Stephen and Christina Dong of Chapel Hill, NC. His brothers David Dong of Cranford, NJ, and Edward Dong of Boston predeceased him. Jim graduated from Roxbury Memorial High School in 1952 and Boston University’s College of Business Administration in 1956. He proudly served in the U.S. Army from 1956 to 1958. Working first at his parents’ laundry in Roxbury, MA, and then their restaurant, China City, in Brookline, MA, he later spent most of his career as a systems analyst at Blue Cross Blue Shield of Massachusetts. An “All American kid” and avid fan of Boston’s sports teams, including the New England Patriots, he attended many games of the Boston Celtics and Red Sox, including the 2004 World Series, and almost caught Ted Williams’ home run in the 1946 All Star Game. He enjoyed bowling with his friends, ballroom dancing with his wife, playing pool with his son, driving as “Deb’s taxi,” and was a creative and talented cook of Chinese-American cuisine. Jim was known mostly for his kind, friendly, and easygoing nature. A memorial service celebrating Jim’s life will take place in Boston on a date in the summer of 2018 to be determined. In lieu of flowers, memorial contributions may be made to the American Cancer Society.

The family of James Dong created this Life Tributes page to make it easy to share your memories.

Send flowers to the Dong family.