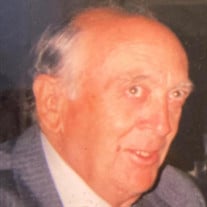 James L. (Feddy) Cunningham of Huntington, WV died on June 19, 2020, at his daughter’s home in Davenport, FL, at the age of 86. He was born in New Haven, WV in 1934 to the late Anna Harris Cunningham Erwin and James Jennings Cunningham. A few years after graduating from Wahama High School, a year early and as Valedictorian of his class, he embarked upon a long, challenging and satisfying career in the chemical industry. Having worked for Celanese Corporation and Stauffer Chemical he retired from his position of Area Superintendent for Akzo Nobel, in the early 1990’s. He had a lengthy and enjoyable retirement and loved spending time with his family. Because of his recent illness his outdoor activities were limited and he really missed being able to get out and do the simple things he loved... playing golf with his buddies, taking walks, and fishing. He was preceded in death by his wife Anna Jeanette Cunningham, sister Anna Louise Colley, brother Donald Gene Cunningham, and grandson Ryan Michael McCormill. He is survived by a sister, Clinedda Erwin Austin (Jack); his children, James (Jim) G. Cunningham (Andrea)-­‐Huntington, WV; Cheryl Denise Bellomy-­‐Davenport, FL and Angela Eddy-­‐Stuart, FL. Grandchildren -­‐ Heather Walton, James Garrett Cunningham (Mandee), Dustin McCormill (Kim), Jessica Stanton (Adam), Patricia Weir (Zach) and Chevali Bellomy. Great Grandchildren -­‐ Triston Stewart (Shannon), Zoe Walton, Lucy Weir, Aden McCormill, Ellie McCormill, Jaiden Bellomy, Beckett Weir, Andrew Stanton, Carter James Stanton, Chace Roman, and Great Great Grandson Avery James Stewart. Although he is sorely missed by those who loved him most, given his declining health the family takes comfort in knowing that he made a courageous decision and died peacefully and stoically, on his own terms. Whatever challenges his beloved family faced, he was always there to lend his support. Regardless of the obstacle, it was no match for his positive attitude, intellect and persistence. One could surmise that his professional success was largely attributable to employing the same approach to adversity in his work life, as he did in his personal life. A celebration of his life will be held in Huntington, on a date to be determined. Memorial contributions can be made to: Boys and Girls Clubs of Huntington, 520 Everett St., Huntington, WV 25702 or the Hospice Organization of your choosing. The family was assisted by Fisk Funeral Home & Crematory in Saint Cloud, FL http://www.fiskfh.com

James L. (Feddy) Cunningham of Huntington, WV died on June 19, 2020, at his daughter&#8217;s home in Davenport, FL, at the age of 86. He was born in New Haven, WV in 1934 to the late Anna Harris Cunningham Erwin and James Jennings Cunningham. A... View Obituary & Service Information

The family of James L. Cunningham created this Life Tributes page to make it easy to share your memories.

Send flowers to the Cunningham family.