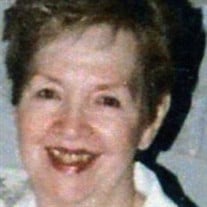 Hilda Rosalia Huffman Velez was born on the 13th of October 1921 in San Juan, Puerto Rico. Born to Felix and Mercedes Velez, and sister to Luisa Velez Nohrden, Delia Velez Werner and Beatriz Velez Nohrden. She lived a pretty amazing life accomplishing many things and touching many lives with her joyful spirit, her undeniable charm, and her love and embracing nature toward everyone. After graduating from Central High School, she worked at the U.S. Naval Base in San Juan, P.R. as a secretary. She was chosen to be the Max Factor representative and would travel the island doing makeup demonstrations until she met Buck (William James Huffman 1923-1996) and married him. Together they lived in the U.S., Mexico and Puerto Rico. Hilda devoted her life to her husband William (Buck) and her children: William (Butch) and his wife Sonia, Bradley and wife Hayde, Bonita (Bonnie), Brent (1952-2015) and his wife Maria del Carmen, Brian (1953-1953), Robert (Bobby) and his wife Sonia, and Elizabeth (Betty) and husband Dennis. She was a Welcome Wagon Lady in her neighborhood, and the first distributor of Holiday Magic makeup and skincare line in Puerto Rico. Hilda opened the first Duty Free shop in Pier 3 in Old San Juan and later opened one at the San Juan International Airport called The B-Hive. After retiring, Hilda and Buck moved to the center of the island to the town of Aibonito, and there she was the treasurer of a Catholic organization called Maria Auxiliadora and was a devout member of The Selecianos Catholic Church. Hilda was a strong woman of faith who prayed her rosary daily and carried her statue of the Virgin of Medjougory wherever she went, for whom she had a special regard. She was blessed with 12 grandchildren: Carola, Dalice, Bryant, Bennet, Byron, Lua, Vanessa, Natalia, Patrick, Alexandra, Alberto and Andrea. She was doubly blessed with the opportunity to meet and hold 6 great grandchildren: Dylan, Irene, Lucio, Grecia, Isabela and Kaylani. Hilda was beloved Aunt and admired friend to an extended family too numerous to include, but whom always treasured her sound advice, guidance, love and her relentless enduring spirit. She was an example to all of faith and love and she passed the meaning and importance of love and prayer and being close to God and Jesus to all who listened. Hilda Huffman lived a blessed and abundant life for 96 years, and passed over to the Heavenly Kingdom on January 6th 2018 in Orlando, Florida.

The family of Hilda Rosalia Huffman Velez created this Life Tributes page to make it easy to share your memories.

Hilda Rosalia Huffman Velez was born on the 13th of October 1921...