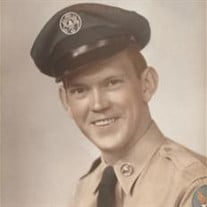 Herman "Kit" Joseph Karsten, 92, of Saint Cloud, passed away on Monday, September 23, 2019 at his residence in Saint Cloud, FL. Kit was born on June 3, 1927 a son to Herman and Helen (Pohnke) Karsten in Detroit, MI. He worked as an Tech... View Obituary & Service Information

The family of Herman "Kit" Joseph Karsten created this Life Tributes page to make it easy to share your memories.

Send flowers to the Karsten family.