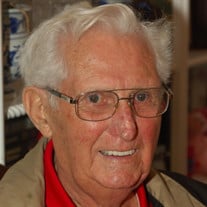 Glenn R. Dye Jr. aka “Moe,” passed away peacefully Wednesday, October 4, 2017 at Florida Hospital Kissimmee after a brief illness. Glenn was born to the late Glenn R. Dye Sr. and Hazel Oaks Dye on July 18, 1928 in Jackson Center, PA. He married his beautiful wife, Joyce Madole Vogan in 1954 in Sandy Lake, PA where he last resided until 2005, at which time he moved permanently to St. Cloud, Florida. Glenn had an extensive work history starting as a farmer, an equipment operator, an assistant superintendent at the highway department, a land-lease agent and a successful business owner. He not only took pride in his business, but truly relished the friends he made during his time in business. He enjoyed hunting trips to Colorado, Wyoming and Alberta, Canada and was an avid golfer. Glenn loved to spend time with his family and friends. He was a life-long Mason and Shriner and supported many benevolent organizations with his time and money. He also was considered somewhat of a connoisseur of honey, maple syrup, rhubarb and horseradish, making nearly annual trips to PA for supplies. Glenn is survived by his sons, Glenn Alton Dye and his wife of 30 years Noemi and John Ellis Dye and his wife of 29 years Dawna; grandchildren, Bryana (Dye) Connors, Dalton Dye, Garrett Dye and John O. Dye; great-grandchildren Jaxson Dye and Raelyn Dye; sister Ida Jane (Dye) Bachelder; cousins Leslie Dye and John A. Dye and numerous nephews, nieces and relatives. Glenn was preceded in death by his parents and wife. He did not wish for a memorial service and he wished to be cremated. He asked that in lieu of flowers, memorial donations may be sent to the Shriners Hospitals for Children.

The family of Glenn Robert Dye Jr. created this Life Tributes page to make it easy to share your memories.

Send flowers to the Dye family.