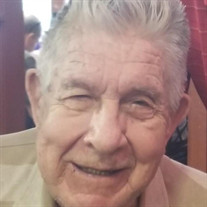 Retired LTC Gerd (Gerry) O. Evert, 87, passed away September 29th, 2020, at Solaris Rehabilitation Center in St. Cloud, Florida where he had been transferred after a brief hospitalization in March for respiratory illness. Gerry and his wife, Meta, retired to St. Cloud in 1983 after serving 27 years in the US Army, Armour. He began his retirement by joining the Narcoosee Volunteer Fire Department and became Fire Chief in 1985. He served in that capacity for the next sixteen years, retiring again in 1999. His life-long career of public service spanned fourty-four years. Gerry started his life in America as an immigrant from Germany in 1955 at age 22, pledging his allegiance both to the United States and the Armed Forces, beginning his military career in 1956 as an enlisted infantry soldier. He advanced through OCS, graduating as a 2nd Lieutenant and subsequently served two terms in Vietnam, 1967/68, 1970/71. During that time while stationed at Fort Benning, Georgia, he met Meta Noland, the owner of a German delicatessen; they were married in 1970 for the next 47 years. During his military career, Gerry served in the United States, Germany, Japan, Vietnam, England, Denmark, Greece, Norway, France and Korea. He obtained a Bachelor’s degree from the University of Nebraska in Omaha, and a Master’s degree from Middleburg College in Vermont. Among his many career highpoints, he most cherished his tour as Tank Battallion Commander in Germany, and his last four years as an Assistant Professor at the West Point Military Acedemy before retiring in 1983 as a Lieutenant Colonel. Gerry’s father had been a firefighter in Germany, so he had grown up around fire stations and fighting fires. Although his career took a different course, he was eventually pulled full circle to join the band of the Narcoosee Volunteer Fire Dept. “Chief” Evert led the station’s twenty-five members for 16 years, responding to over 5,000 emergency calls. He played a key role in the construction of the new fire station, which was eventually turned over to the county. His dedication to the station, community and his men was always a passion. Another passion for Gerry throughout his life was soccer, which he began playing early in his life. While working as an apprentice banker in Germany, three commercial banks sponsored soccer teams, and he played fullback and goalie for the banks’ semi-pro team, the “Stuttgart Kickers” until moving to Texas in 1955. While still in the Army in 1980, he was one of the coaches preparing the U.S. Olympic Soccer Team for the games. Unfortunately, the US boycotted the Olympics that year and his team was disbanded. He didn’t stop his playing, though; he went on to coach his three grandsons and their teams through years of soccer in Narcoosee. Meta, Gerry’s second wife, came with two daughters, Georgia 18, and Elizabeth 12. We have had our “adopted” father with us for 52 years and during that time, he earned the title of “father” in our family. We have many wonderful memories of a wonderful, funny, strong, hard-working man who never gave up, on anyone or anything. He will be missed. We are also grateful to the wonderful community people of St. Cloud and Narcoosee who embraced him wholeheartedly and enriched his life. Gerry was predeceased by both of his parents, a sister and Meta, his wife of 47 years. He is survived by two daugters, Elizabeth Wolf of St. Cloud, Georgia Metcalf of Palm Bay, FL; two sons from his first marriage, Dr. Benjamin Evert (Monica, also a physician) and Michael Evert (Ute) in Germany. He leaves six grandchildren, Stewart, Travis and Reed of St. Cloud, and Maximillian, Benjamin and Julia of Germany. Fisk Funeral Home in St. Cloud is in charge of final arrangements. There will be a private memorial service and interrment in spring of 2021 at the military cemetary in Scottsmoor. No services will be held at this time due to Covid restrictions.

Retired LTC Gerd (Gerry) O. Evert, 87, passed away September 29th, 2020, at Solaris Rehabilitation Center in St. Cloud, Florida where he had been transferred after a brief hospitalization in March for respiratory illness. Gerry and his... View Obituary & Service Information

The family of Gerd "Gerry" O. Evert created this Life Tributes page to make it easy to share your memories.

Send flowers to the Evert family.