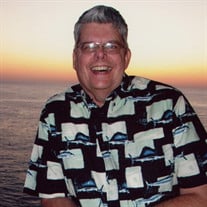 Gary Edward Ertman, passed away at 6:30 a.m., on Friday, June 5, 2020. Gary had a stroke on June 23, 2018, and was suffering from complications of advanced cancer. Gary was born on January 31, 1947, in Miami Beach, FL to Edward and Ethel Ertman. Shortly after his birth, he moved with his parents to Pittsburgh, PA. He moved to Kissimmee in 1970. Gary met his future wife, Marilyn, in 1973 and they married in 1974. He worked with Osceola County Public Safety as a Cartographic Engineer, he supplied the maps for Fire Departments, etc. Gary was a collector of classic model cars, mostly of the 50's. He loved to go on cruises with his family. He always had a smile for everyone and found great joy in being a comedian and making people laugh. He will be sorely missed by those he left behind: wife, Marilyn, step-son, Lloyd, son-in-law, Norman, step-son, Gary B. and wife Laura, and best friend Marguerita.

The family of Gary E. Ertman created this Life Tributes page to make it easy to share your memories.

Send flowers to the Ertman family.