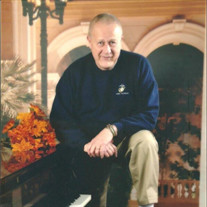 Gary Royal Elwell, 82, originally of Brookfield, CT, beloved husband of the late Ruth McCarthy Elwell, passed away at home in Saint Cloud, Fl on November 16th. He was surrounded by his daughter and caregiver, Jeanne Gebert, his son-in-law Wayne and his granddaughter Megan when he was called home. Gary was born in Danbury, CT on January 19, 1938, son of the late Wayne Horton Elwell and Gloria Beers Elwell. He was a graduate of Danbury High School and for a short time had also attended CT State Teachers College. He served in the United States Marine Corps, was a Trooper for the CT State Police and spent the remainder of his career at the Danbury United States Post Office, retiring as a Supervisor after 30 years. Gary enjoyed many trips to Cape Cod with his wife Ruth and spent countless hours with her tending to their many gardens. He loved going to see various lighthouses in New England and had a vast collection of replicas at home. In addition, he had a passion for music, particularly surf music along with music from the 1950s. He enjoyed sudoku and crossword puzzles. He was an avid fan of the NY Giants and Notre Dame football teams. He was extremely proud of his service in the Marine Corps and often wore USMC shirts and collected USMC memorabilia. Gary (also affectionately known as Daddy, Pops, Poppie and Gramps) will be greatly missed by his four children, Joe Elwell, Lisa Baldwin, Scott Elwell and his wife, Ann, Jeanne Gebert and her husband Wayne; his eight grandchildren, Joseph, David, Ryan, Sarah, Tyler, Megan, Michael and Hailey; and his great grandson David Jr. He is also survived by his brothers Wayne and his wife Izzy, George and his wife Marianne, and his sisters, Lucille, Gaye and her husband Cecil, Gloria and her best friend, Sheree; and many nieces and nephews. The family will be celebrating Gary’s life privately. In lieu of flowers, donations in his name can be made to the Marine Corps Heritage Foundation.

Gary Royal Elwell, 82, originally of Brookfield, CT, beloved husband of the late Ruth McCarthy Elwell, passed away at home in Saint Cloud, Fl on November 16th. He was surrounded by his daughter and caregiver, Jeanne Gebert, his son-in-law Wayne... View Obituary & Service Information

The family of Gary Royal Elwell created this Life Tributes page to make it easy to share your memories.

Send flowers to the Elwell family.