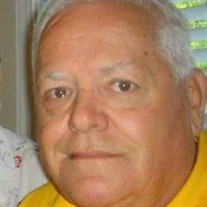 After a battle with cancer, Fred went to join his parents and brother Friday, May 21, 2021, age 76, at home in Kissimmee, FL. His deceased parents are, Fred W Brookover, Sr, Katherine (Falkenstein) Brookover. Fred also was preceded in death by his infant daughter, Bianca; Brother, Don Brookover; a niece, Kimberly and her infant daughter Riana; mother- and father-in-law, Phil & Mary Campanale. He joins with his precious dogs Lady and Friskie. We met at my cousin’s wedding in 1972 and from there on we traveled by car, ship and plane to many destinations, some to explore, family fun and some to golf. We started a New Year’s Day morning drive for breakfast in all directions in NE Ohio and back home for football. This was after a couple hours of sleep after his delivery of BJ newspaper. He never missed the activities of Theresa and Philip (Italian Cotillion, pompom, karate, football, baseball and choir). Employed by DeLuca Distributing until it closed and retired 2002 from Akron Beacon Journal as Circulation Driver. We moved to Myrtle Beach 2003 for 16 years for golf and moved around Christmas 2019 to Merritt Island with our son for R&R and made home in Kissimmee 2020. Survived by devoted wife of 47 years Dolores (Campanale) Brookover, daughter, Theresa (Chris) Hunsucker and his son Christopher Hunsucker; son, Philip (his fiancée Kendall Wulff) and her son Wesley; sisters-in-law, Cheryl Brookover Beale, Marie (Michael) Buehler, Phyllis (Mark) Craig, step nephews, Shawn, Bryan and Jason Craig. Nieces Barbara Brookover, her son Ryder; Jennifer (Pat) Archer, their Nick and Kate; nephew David (Becky) Buehler and their Joey and Tommy; many cousins, but special Mary Ann Taray and Bob Tigelman; and one “Brother”, Sam Orlando and his wife Joanne, many thanks for faithful support of Mike (Mary) Burch, Angelo (Cassie) Fortunato, Emery Serdinak; and missed by our Zoe and grandpuppies Mojo and Gizmo. Fred coached St Martha football, Firestone Park Pee Wee Football, was an assistant golf coach at Green High with his son playing. His big love was playing golf on many leagues and golf weeks in the area for the 2 of us and on vacations. He was in Kiwanis where he was very active in Key Club for Green Students to encourage community volunteering; chaired committees (IBH fundraiser, Senior Amateur Golf week, Green Kiwanis Santa, BJ Christmas party and to Children Burn Unit with Theresa as his elf). We had fun nights as the family volunteered at the Akron Civic Center. After his accident 1996, caused by a drunk driver (who died of his injuries), he lectured for S.A.D.D. (Students Against Drunk Driving) and the end of the session showed them the result by exposing his prosthetic leg to the seniors before prom. The students thanked him and some football players were so touched that they cried. The BJ acknowledged his volunteering as the first Employee Volunteer of BJ. Our thanks to the Vitas Hospice home care team, especially his aid, Velma, nurse Lamary who understood him and served him as he wished. We want to thank so many that have supported us in this time – family, friends, classmates, neighbors of the past and present. Your gestures of support are so many and so overwhelming. Following Fred’s wishes, he has been cremated. A Blessing Ceremony was held June 9, 2021 in the Chapel at Holy Redeemer in Kissimmee, Florida. Family and Friends may come at 9:15 am for a Memorial Mass to be Celebrated at 10 am Saturday, July 31, at Queen of Heaven Catholic Church, --1800 Steese Rd, Uniontown, Ohio. Interment will be in Holy Cross Cemetery, Akron, Ohio. Donations may be given to the American Cancer Society. To leave a message for Fred’s family, read the full obituary and tribute video, please visit www.fiskfh.com, Fisk Funeral Home and Crematory of St. Cloud, FL.

After a battle with cancer, Fred went to join his parents and brother Friday, May 21, 2021, age 76, at home in Kissimmee, FL. His deceased parents are, Fred W Brookover, Sr, Katherine (Falkenstein) Brookover. Fred also was preceded in death... View Obituary & Service Information

The family of Fred William Brookover Jr. created this Life Tributes page to make it easy to share your memories.

After a battle with cancer, Fred went to join his parents and...

Send flowers to the Brookover family.