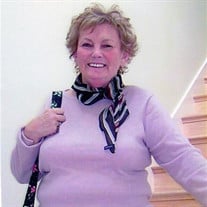 Elaine M. Hachey, 80 Community Advocate for People with Disabilities and the Elderly Elaine Marie Hachey, formerly of Wilmington, Massachusetts passed peacefully at the St. Cloud Hospital in St. Cloud, Florida on Sunday, February 23, 2020. Born in Watertown, MA on May 25, 1939, Elaine was 80 years old. Elaine married CMS James Robert Hachey USAF in Medford MA. They moved to Wilmington MA and raised four children. Elaine was a devout Catholic and raised her family in the Catholic faith as a member of Wilmington’s St. Thomas of Villanova church. Joining the Knights of Columbus community,Elaine and Jim met other young families, developing friendships that spanned decades. Elaine was well known for her independent spirit. she taught many of her women friends who were originally from the city, how to drive in the car-dependent suburbs.Elaine became a community resource advocate for families and senior citizens navigating life with disabilities after her daughter, Patricia Ann became disabled in 1973. Elaine successfully lobbied MA state representative Jim Micelli and Senator Ted Kennedy to secure access to a proper skilled nursing care facility for her daughter. She then volunteered with many community service agencies in Wilmington such as the the Wilmington Council on Aging, and the Wilmington Housing Authority where she served as board Treasurer. Elaine co-founded the organization AIM - Handicap Access Is Mandatory, an organization that encouraged local businesses to comply with new, Massachusetts ADA laws and regulations. Elaine also volunteered with her husband Jim Hachey Sr. in many of his community efforts — The Commissary - Wilmington’s Food Pantry, the Community Fund, and for the Wilmington Fourth of July Committee. A staunch democrat, Elaine served as Chairwoman of the Wilmington Democratic Town Committee and acted as campaign manager for a handful of local and state politicians. Always one to support the underdog, it wasn’t until 1983 when her chosen candidate won. She was a delegate at the State Democratic convention and attended Governor Michael Dukakis’ inaugural ball. Elaine was an active member of the American Legion in Wilmington and later, at Post 10 in Kissimmee, Florida. Professionally, Elaine owned and ran a successful catering company providing daily service to the Burlington and Andover MA, corporate offices of Nynex, and did corporate events and weddings. Elaine and Jim retired to Kissimmee, Florida and lived out much of their golden years surrounded by immediate family, and the lights of her life — her beloved grandchildren. After a debilitating fall in 2012, Elaine resided at the Avanté of St. Cloud skilled nursing facility. A respected resident, Elaine was nurtured by many kind caregivers at Avanté whom she loved dearly. She is survived by her daughter Mary L. Nichols of Saint Cloud, FL, her son James R. Hachey Jr., his wife Linda, and daughter Dorothy Hachey of Seattle, WA. Her loving grandchildren Matthew O’Doherty, Holly Nichols, Connor Hachey, Brianna Hachey, Lukas Hachey, Makie Koizumi - Hachey, Seiji Koizumi - Hachey and Isamu Koizumi - Hachey. Her siblings Margaret Fitzmaurice, John Bucci and Alex Bucci with many cousins, nieces, nephews and dear friends. She is pre-deceased by her devoted husband James Robert Hachey Sr., her daughter Patricia A. Hachey, brothers Thomas and Robert Bucci and mother, Dorothy (Walsh) Bucci. Florida Memorial Service to be held at 2:00 PM, Thursday, February 27 at the St. Thomas Aquinas Catholic Church in St. Cloud, FL. A gathering with light refreshments immediately following at the St. Thomas social hall. Friends and family welcome to attend. A family graveside service at the Wildwood Cemetery in Wilmington Massachusetts will be announced at a later date.

The family of Elaine Marie Hachey created this Life Tributes page to make it easy to share your memories.

Send flowers to the Hachey family.