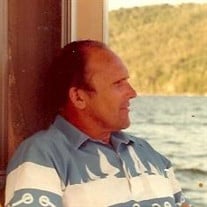 Dorman Gleason passed away in St. Cloud, Florida, January 18, 2022 at the age of 90. Dorman was born November 17,1931 in Hammondsport, New York. He was the son of Gerald and Carrie Earll Gleason. He graduated from Hammondsport Central High School, then attended Alfred College where he graduated with a degree in Agriculture. Dorman worked at Gold Seal Winery in the mid 1950’s - early 1960’s, and lived in the Urbana community. He worked along side Dr. Frank, and was instrumental in helping plant the Vinifera vines which were the beginning of Dr. Frank’s vineyards. Dorman was employed at Bully Hill for Walter Taylor overseeing their farm during the mid ’60’s. He worked for Zeke Mendall in his vineyards then returned to Gold Seal Winery. In 1966, he purchased a 40-acre vineyard on the west side of Keuka Lake. He sold his grapes to the local wineries, as well as surrounding fruit stands and community markets. In 1992 he retired from Gold Seal Vineyards (Seagrams). At his retirement party, many comments were made of his viticulture knowledge and his ability to work well with everyone he supervised. This expertise didn’t just come from Dorman’s education but was in his blood. Dorman’s great grandfather was an early vineyardist in the area, planted his first vineyard around 1875. His grandfather, Edgar Gleason won a prize from the World’s Fair for his grapes. Vineyard work kept Dorman very busy, but he still found time to be active and dedicated in his service with Masonic organization. He also enjoyed time spent at various campgrounds, spending time with his family, and enjoying the lake. At 82 he was slowing down and decided to sell his home and vineyards overlooking Keuka Lake. After 6 more winters in Dansville, NY, his wife Connie and he decided to move to Florida where he enjoyed 2 years of sunshine. Dorman is preceded in death by his parents; sisters Carolyn Gleason, Geraldine Gleason Simmons, brother Edgar Gleason, infant son Bradley and Bruce Chipper Gleason and former wife Jennie Stansbury Gleason. He is survived by his loving wife of 28 years of marriage, Connie Davis Gleason; daughter Kim Gleason Stephens( Dan); grandchildren, Adam, Mark and Emily Stephens; great grandchildren, Patrick and Paren Stephens. Dorman was thrilled when by his marriage to Connie he gained two sons and a daughter. Mike Davis( Shirley); grandchildren, Shane and Felicia Davis; son Brian Davis(Tammy); grandchildren, Holly Hogan(James); grandchildren, Adeline and Maggie Hogan; Stephanie Davis Fitzwater (Robert); granddaughter, Alexis Fitzwater; Krista Davis( Jeanette); grandchild, Lydia Davis and Jessica Davis; daughter Vickie Davis Phenix (Tri); grandchildren, Emily, Sarah and Josh Phenix. Dorman will be cremated, and a celebration of life will be held this summer near Keuka Lake. Any stories you would like to share about Dorman would be so appreciated by his family. thru

Dorman Gleason passed away in St. Cloud, Florida, January 18, 2022 at the age of 90. Dorman was born November 17,1931 in Hammondsport, New York. He was the son of Gerald and Carrie Earll Gleason. He graduated from Hammondsport Central High School,... View Obituary & Service Information

The family of Dorman Gleason created this Life Tributes page to make it easy to share your memories.

Send flowers to the Gleason family.