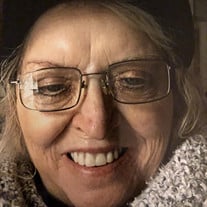 Donna M. Teems, 64, of Saint Cloud, passed away on Tuesday, March 26, 2019 at St. Cloud Regional Medical Center. She was born on April 9, 1954 a daughter to John and Pauline Aubrey Bechard in Lowell, MA. Donna worked as a Accountant for... View Obituary & Service Information

The family of Donna M. Teems created this Life Tributes page to make it easy to share your memories.

Send flowers to the Teems family.