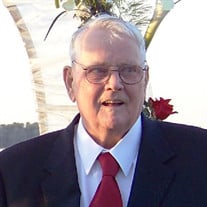 Donald W. Larson, 89, passed away peacefully on September 9, 2018 after being hospitalized with a severe infection. Don was born on July 26, 1929 in Waterman, Illinois to Reuben L Larson and Amalia Fredericke “Molly” Weddige Larson. He was the youngest of 4 children and worked the family farm while growing up. He fully embraced his Swedish and German heritage. Don enjoyed the unique distinction of being in the last 8th grade graduating class of the one room Stuartville schoolhouse in Kingston, Illinois in 1942, and also in the final Kingston High School graduating class in 1947. Don was drafted into the US Army in 1954 and served for 2 years as Combat Engineer, 4th Armored Division, Company A, Fort Hood, Texas. He was extremely proud of his military service, earning the marksman and sharpshooter awards and the “Good Conduct Medal”. While serving his country, Don was scouted but turned down an offer to play major league baseball for the Cincinnati Reds. In his younger days, Don was extremely athletic and excelled at sports. He was an avid outdoorsman who loved hunting, trapping and fishing on the Kishwaukee River that ran through the family farm. Don was a successful dairy, livestock, grain and vegetable farmer; and he farmed all of his adult life in the Kingston and Kirkland Illinois areas. He was also a gifted mechanic, tinkerer, and inventor who preferred to design and build things rather than buy a finished product. He relocated to Florida in 1986 where he eventually retired. Don is preceded in death by his parents Reuben and Mollie, his brother Roy Larson, and sisters Irene Kammeyer and Myrtle Bass. Don is survived by his loving wife of 65 years, Grace Larson (Gradilone) of Kissimmee, Florida, son Donald Larson Jr (Adrienne) of St. Cloud, Florida, and daughter Amelia L Burke (David) of Victor, New York, 4 grandchildren and 2 great grandchildren, and many nieces and nephews who were very dear to him. Don will always be fondly remembered for his unwavering devotion to family, education, honesty, integrity, generosity and his tremendous sense of humor. Don enjoyed a life well lived, and his desire for a military ceremony, service and burial are being honored by his family as we celebrate his long, full and productive life. Donald’s final resting place will be the Cape Canaveral National Veterans Cemetery in Florida. Services will be on Friday, October 12th at 1pm. Arrangements are being handled by Fisk Funeral Home of St. Cloud, Florida and the Veterans Administration. In lieu of flowers, honorariums are being accepted in Don’s name to any of the following 3 charities that he felt so strongly about: American Farmland Trust: https://secure2.convio.net/aft/site/Donation2?df_id=7400&7400.donation=form1&_ga=2.67062254.1744209555.1537192972-510314105.1524078420 Disable American Veterans Charitable Service Trust: http://cst.dav.org/donate/Default.aspx Alzheimer’s Association: https://act.alz.org/site/Donation2?df_id=32112&32112.donation=form1

The family of Donald W. Larson created this Life Tributes page to make it easy to share your memories.

Send flowers to the Larson family.