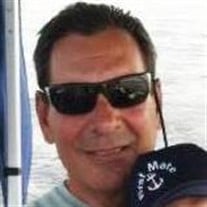 Dominic Thomas Esposito- Born, September 29, 1947 in Brooklyn N.Y. to Mario Esposito and Mary Fiscina Esposito passed away May 28, 2022. He died much sooner than those who loved him wanted but without long-term suffering from cancer. He leaves behind his Daughter Mary Esposito Bevill, son-in-law Tony Bevill, His beloved Granddaughter, Dawna-Paris Bevill, His Brother Nick Esposito, his sister-in-law Donna Bartho Esposito, his Niece Denise Esposito-Farrelly and Nephew Rick Esposito His True soulmate Deborah Ellis, and His Shitzu, Sophie Girl (aka The Muff). He also leaves behind many Esposito and Fiscina relatives as well as numerous long-time friends. His only son, Nick Esposito, died almost two years ago in a work-related accident. Dominic’s heart was broken, and he never truly recovered from this tragic loss. Dominic had a wonderful life and was loved by many people. He took on the role of a single father to two young children, who remain forever grateful. Dominic was an amazing salesman and enjoyed his work. He was a proud and respected Veteran of the United States Army. He loved to fish, and his nickname was “The Salmon King”. He loved music and Italian food as well as Art, He was an avid collector of Armani statues. His favorite color was red, he loved growing orchids. He enjoyed the song Over the Rainbow / What a Wonderful World- by Israel Kamakawiwoʻole and asked for it to be played at his Celebration’s of Life. We all love and miss him and hope he is now at peace with his son, parents, and all his loved ones who left us too soon. There will be Celebration’s of Life scheduled for Dominic in Maui, Hawaii; Muskegon, MI; and New York, NY. Specifics of these celebrations will be posted when the details are finalized.

Dominic Thomas Esposito- Born, September 29, 1947 in Brooklyn N.Y. to Mario Esposito and Mary Fiscina Esposito passed away May 28, 2022. He died much sooner than those who loved him wanted but without long-term suffering from cancer. He leaves... View Obituary & Service Information

The family of Dominic T Esposito created this Life Tributes page to make it easy to share your memories.

Send flowers to the Esposito family.