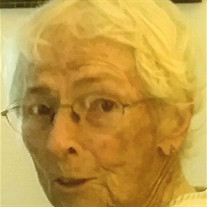 Della Mae Varney Miller of Kenansville, FL formerly from Muscatine, IA, passed away Saturday, September 8, 2018. Della was born June 30, 1931, to Robert and Wanda Varney. She graduated from MHS in 1950. Della worked at Muscatine Journal from 1952 -1960, and Model Laundry from 1962 - 1965, she then went on to run her own business, Della's Paper and Painting from 1965-2005. Della married Roy A. Miller, January 3, 1953, and they moved to Kenansville, FL in 2004. She enjoyed calling Bingo 3 nights a week, but what she enjoyed the most was spending time with her grandkids and great grandkids. She also loved just riding her golf cart around the community where she got the nick name "The Mayor", and visiting with everyone. She never met a stranger she didn't know. She was also a member of the local church. Della is survived by 2 children; LaVoy (David) Goreham, of Muscatine, IA, and Karen (Robert) Brandon of Aledo, IL, 6 grandkids, and several great grandkids, her sister Betty Korthaus of Mission, TX, and brother Richard Varney of Long Beach, CA, along with many nieces, nephews, and lots of friends. She was preceded in death bey her parents, her husband (Roy), son (Randy), and 3 brothers (Tom, Stephan, and Robert). Per her request, she was cremated at Fisk Funeral Home in St. Cloud, FL. A celebration of life will be held at the Club House in Kenansville, FL. Saturday, September 22, 2018, 2:00 P.M. - 5:00 P.M. A celebration of life will be held at a later date in Muscatine IA.

The family of Della M. Miller created this Life Tributes page to make it easy to share your memories.

Send flowers to the Miller family.