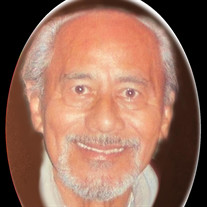 DELFADO (DEL) SEBASTIAN PLACIDES, often referred to by many close friends and relatives as “Danny”, a resident of Lakeland, Polk County, Florida passed away on Monday, May 4, 2020. Mr. Placides, was a retired Healthcare Food Service Administrator, educator, consultant, and Florida realtor and real estate teacher and a published author of several books relating to heritage, immigrating to America, coming of age, and food (a topic he was passionate about). He moved to Lakeland in 2019 to be closer to his family from St. Cloud where he lived since 1996 when he moved up to this area from Miami. Mr. Placides was born in Philadelphia, Pennsylvania, was a Roman Catholic, an Army Veteran of the Korean War and a U.S. Merchant Marine. He did a world tour with President Ronald Reagan as a food ambassador for the U.S. He was a 4 Degree with the Knights th of Columbus and was a lecturer and usher at St. Thomas Aquinas Church in St. Cloud. He was a distinguished alumnus from Temple University and Florida International University, as well as a visiting Adjunct Professor. He was a lifetime member of the Knights of Columbus, a member of the American Legion, a member of the Sons of Italy, past member of the Peninsula Hispanic American Association, volunteered for Give Kids the World organization, and a member and past participant to a number of professional work-related organizations, both national and local. He was a dedicated runner, including participating in numerous marathons with his last being the 2017 Gasparilla in Tampa; a passionate dancer, including dancing on American Band Stand (back in the day) participating in the Polk Senior Games as well as joining along with the Beach Boppers of Orlando and other dance groups whenever he could work it into his busy schedule; and an enthusiastic karaoke participant. He is survived by his sister, Bernadina Aguilar from Philadelphia, Pennsylvania; his son, Victor S. Placides and his wife, from Lakeland; his daughter, Joanne M. Posey and her husband, from Lilburn, Georgia; his son, Manuel J. Placides from Lakeland; twelve (12) grandchildren and twentyfour (24) great-grandchildren. Mr. Placides was preceded in death by his wife, Joan K. Vogel-Placides; daughter, Delores M. Placides-Fisher; stepdaughter, Monica M. Burke- Smith; and stepson, Barry A. Burke. After much deliberation regarding funeral arrangements due to the Coronavirus Pandemic and the restrictions on travel and social gatherings, the family has decided that it is best to postpone the funeral to a later date for the safety of all of “Del/Danny’s” friends and family. Accordingly, the “Celebration of Life” for Delfado Sebastian Placides, which will be arranged by Fisk Funeral Home & Crematory in St. Cloud, will be held at the Florida National Cemetery in Bushnell, Florida, where he will receive a miliary burial approximately one (1) year from his death. For more information and updates as they become available for the Celebration of Life, you may contact Lora Marie (one of his granddaughters) via e-mail: LiveL[email protected] In lieu of flowers, the family requests a donation be made to the Delores Placides-Fisher Scholarship Fund c/o St. Thomas Aquinas School, St. Cloud, Florida.

DELFADO (DEL) SEBASTIAN PLACIDES, often referred to by many close friends and relatives as &#8220;Danny&#8221;, a resident of Lakeland, Polk County, Florida passed away on Monday, May 4, 2020. Mr. Placides, was a retired Healthcare Food Service... View Obituary & Service Information

The family of Delfado Sebastian Placides created this Life Tributes page to make it easy to share your memories.

DELFADO (DEL) SEBASTIAN PLACIDES, often referred to by many close...

Send flowers to the Placides family.