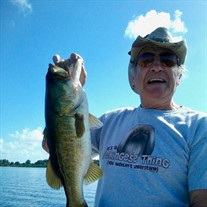 Curtis Post ‘Nick’ Nicholson passed away July 6, 2018, at his home in Kissimmee, Florida, surrounded by his family. He was born June 3, 1936, in Masontown, West Virginia. Nick lost his mother at the early age of 12 and left home a few years later, living with siblings and attending schools to finish his education. He joined the U.S. Army, where he was stationed in Germany from 1953 to 1956. Nick was a Master Electrician and retired out of the IBEW Local 226 in Topeka, Kansas. He and his wife Joyce were owners of Castle Electric and did commercial electrical and control work for many years. After retirement, he and Joyce moved to Sedgewickville, Missouri, with their son Nick and then to Kissimmee, Florida, to live with their daughter Kim and son-in-law Cliff. His favorite past-times in retirement were to fish and pitch horseshoes with Cliff, and enjoy a cold beer with friends. Nick was a jokester and made friends with most everyone he met. He was preceded in death by his parents Thornton and Virginia Blanche Smith Nicholson of Masontown, West Virginia; seven brothers Bunner Lednadis Nicholson, Lloyd Wilber Nicholson, Elmer Phillip Nicholson, Kenneth Allen Nicholson, Henry Joseph Nicholson, David Lawrence Nicholson; and four sisters Laura Lucille Atkinson, Thelma Mae Gaus, Evelyn Jeanne Sweedar, and Verda Vivian Remel. He is survived by his wife of more than 60 years, Joyce Castle Nicholson of the home; a sister Wilma Rose Paynter of Newark, Ohio; a brother Gilbert Franklin Nicholson of Owensboro, Kentucky; his daughter Kim Hund (Cliff) of Kissimmee Florida; his son Curtis Bret ‘Nick’ Nicholson (Sally) of Galveston, Texas; three grandchildren Trey Streetman of Paducah, Kentucky, Christopher Young (Shannon) of Topeka, Kansas, and Emily Nicholson of Los Angeles, California; two step-grandchildren Jennifer Rose (Scott) of Council Grove, Kansas, and Stacy Hund (Amy) of Lawrence, Kansas; six great-grandchildren Aryannah and Nickolys Young, Kolby and Kyler Rose, Laylani and Michael Channel; along with numerous nieces and nephews and their families. Fisk Funeral Home of St. Cloud, Florida, is in charge of arrangements. As per his wishes, Nick was cremated. Private services will be held at a later date. In lieu of flowers, contributions can be made to the American Brain Tumor Association at https://www.abta.org/ways-to-donate/donate-now/

The family of Curtis P. Nicholson created this Life Tributes page to make it easy to share your memories.

Send flowers to the Nicholson family.