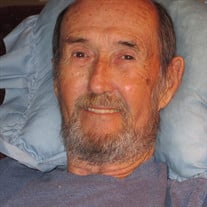 Charles Russell Slater passed away peacefully on November 15th, 2017 at his home in Saint Cloud Fl. He fought a long, hard fight with cancer, dementia and cerebral atrophy. He was 78 years old and is survived by his loving wife, Rada, his son Ray, three grandchildren and two great grandsons. Charlie was born on April 17th, 1939 in Charleston West Virginia to Charles Russell Slater, Sr. and Tressa Olive Frame Slater. Growing up he enjoyed going to the movies, the local ice cream shop and spending time with his Aunt Gladys. He married Rada Louise Eskins on November 25th, 1960 at the age of 21. This year would have marked their 57th wedding anniversary. They began their life together in Huntington, W.Va where they gave birth to their only son Ray. They moved to Rochester, N.Y, Irmo S.C, Chapin, S.C. and eventually retired together in Saint Cloud Fl. They enjoyed many happy years together, living on the lake in Chapin, boating, swimming and fishing with their son and three grandsons, Ryan, Cameron and Corbin. Charlie was a hard worker who loved his family very much and always sought to ensure that they were well cared for. After three separate retirements and finally settling down in Saint Cloud, Charlie lived an active lifestyle. He enjoyed walking down by the lake very much beginning in 2007 and surpassed 20,000 miles which the family recognized by honoring him with a trophy for his accomplishment. He and Rada loved to travel and they enjoyed cruises and many weekend and day trips to the coast or wherever their dreams led them. They also enjoyed going to the movies and shared a love for animals, which led them to have many joyful cats and dogs over the life of their marriage. Charlie was a good man, husband, dad, grandfather and great grandfather. He shared his love of Disney and football with his family as well as life in general. He brought a great deal of happiness to our family and his friends over the years. He will be sorely missed but will always be found fondly in our memories. We loved him very much.

Charles Russell Slater passed away peacefully on November 15th, 2017 at his home in Saint Cloud Fl. He fought a long, hard fight with cancer, dementia and cerebral atrophy. He was 78 years old and is survived by his loving wife, Rada, his son... View Obituary & Service Information

The family of Charles R. "Chuck" Slater created this Life Tributes page to make it easy to share your memories.

Send flowers to the Slater family.