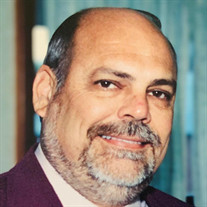 Charles “Chuck” Cooper, lifelong resident of St. Cloud, FL died at the Orlando VA Medical Center at Lake Nona on Friday, June 11, 2021 at the age of 72. Chuck was born in Kissimmee, Florida on December 14, 1948. He was son to the late Ralph “Sonny” & Mary Ellen Cooper. After graduating from St. Cloud High School in 1966, Chuck joined the Army where he served for three years, including one year of deployment to Vietnam. Chuck later returned to St. Cloud to join his father, Sonny, as an independent home builder in the family business. His younger brother, Randy, also later joined in the family business where more than 400 “Cooper-Built” homes were constructed collectively on every street in the "state-street grid" except Columbia Avenue. Chuck took great pride in his service to the City of St. Cloud as a City Council member. His tenure spanned nearly four decades. Chuck was first elected to the City Council in 1985. He served 1985-1988, 1994-1995, and 2016-2021, having been re-elected most recently in November 2020. He also served on the City’s Code Enforcement Board from 2003 until 2016. Additionally, Chuck served on the City’s Planning Board and Board of Adjustment and Appeals. He was a member of the First Baptist Church of St. Cloud and also a lifetime member of the Veterans of Foreign Wars (VFW). Chuck leaves behind to cherish his memory three daughters: Christa DiBiase (Neal), Knoxville, TN, Cynthia Cooper, Lake Whales, FL, & Caralyn Snyder (Joe), Erwin, TN; six grandchildren: Kendra, Caitlyn, Kaylee, Kimberly, Jay & Carleigh; and three great-grandchildren: Tom, Kaizer & Dallas; the mother of his children: Vicki Smith; one brother: Randy Cooper (Liz); two nieces: Alicia & Erica and his girlfriend and caregiver for many years, Libby Roberts. Arrangements are entrusted to Fisk Funeral Home, 1107 Massachusetts Avenue, St. Cloud, FL 34769 (407) 892-2155. For online condolences, please visit www.fiskfh.com In lieu of flowers, the family request that donations be made in honor of Chuck Cooper to Tunnels to Towers Foundation.

The family of Charles Edward Cooper created this Life Tributes page to make it easy to share your memories.

Send flowers to the Cooper family.