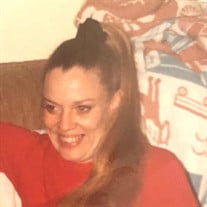 Cathryn (Cathy) Logsdon, 70 Cathryn Jo Logsdon of St. Cloud was gifted angel wings on Saturday, March 20, 2021. She was born January 30, 1951, in Stillwater, Oklahoma. Her father, William “Sandy”, was an industrial Engineer and WWII veteran, and her mother, Minerva “Mickey” (Stiner) Pierce, was an accountant. Cathy attended Bedford High School in Bedford, Indiana before marrying and moving to California in the early 1970s. She and her spouse relocated to St. Cloud, Florida in 1977 to raise their children, where she lived until her passing. She was a restaurant manager for many years for Pizza Hut, Howard Johnson, and Sonny’s. Cathy was known for her beautiful flowing hair, which was always waist length, and for her gifts as an artist. She painted, created crafts to celebrate special occasions, and painted eggs. She loved to share her passion by gifting her creations to family and friends. She also loved animals, but most especially cats, having many throughout her life. Cathy was extremely close with her family and spent most of her spare time with her grandchildren. Cathy attended The Church of Jesus Christ of Latter-day Saints. Cathy is survived by her sister Judith Becker of McAlester, Oklahoma, her children, Shanna Johnston of Melbourne, Florida and Michael Logsdon of St. Cloud, Florida, her grandsons, David (DJ) Newark (20), Robert Johnston (14), Riley Johnston (12), Zavier Metz (22), and Jackson Logsdon (13), along with several nieces, nephews, and cousins. She is preceded in death by her mother Minerva Pierce and father William Pierce. A small memorial service was held for the family on April 9, at Fisk Funeral Home in Saint Cloud, FL.

The family of Cathryn Jo Logsdon created this Life Tributes page to make it easy to share your memories.

Send flowers to the Logsdon family.