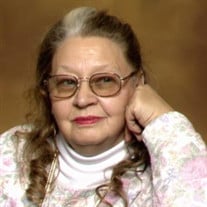 Bernice Rink Lees entered her earthly existence on May 21, 1935 in Scranton, Pennsylvania and migrated to a better one on May 25, 2021. During her adventure on this third planet from the sun, the one word that best describes her (albeit one word hardly suffices) is "over-comer". As a newborn baby, Bernice was involved in a car accident and thrown through the windshield. She wasn't expected to survive, but she did! At the tender age of eight, she was stricken with polio and wasn't expected to survive, but she did! Then, as a full-grown mother of 3 children (David, Susan, and Ralph Rink), she developed breast cancer and was miraculously cured. Despite her circumstances of being raised without a father after the age of 5, and with her mother, Maud Born, barely able to make ends meet, she managed to rise above the difficult trials that life presented to her. She was one of the first women leaders in industry when she became the manager of the dye shop for Endicott Johnson Shoe company in Binghamton, NY and received a letter of accommodation from Governor Nelson Rockefeller that was also signed by Kitty Carlyle, a well-known TV star. She left industry and started her own business as a hair dresser in Auburn, NY titled the Rinky Dink Beauty Salon while also working for Roux Labs as a hair color expert and sales agent. Doing well financially, in 1973, she bought an income property on Lake Ave in Auburn, NY and hired a young man, Rodney Lees to work on her newly acquired property, who she had met at a Spiritualist Camp in Freeville, NY. This young man (18 yrs her younger) soon became infatuated with her and the two were married on November 24, 1974, and she became pregnant despite her primary physician telling her she probably could never become pregnant due to her severely damaged uterus. But she did! Now at age 40, and diagnosed with diabetes, her obstetrician informed her that she should terminate the pregnancy because there was a very likely chance she would die during childbirth. Preston Lees, a whopping 23 inches long and weighing 10 lbs 4 oz was born on October 30, 1975. Once again, she overcame the odds. In 1984, she suffered a stroke, leaving her with facial droop and difficulty with words. Using a scrabble board, she was able to overcome the effects of the stroke and resume a normal life. Other health problems continued to plague her for the rest of her life as she suffered through 3 heart attacks, and crippling scoliosis relegating her to a wheelchair for mobility outside the house. In 2012, for the sake of her family, she elected to move from her favorite house in Syracuse to St Cloud, Florida. There, she took on a new career as a loving, inspirational, and doting grandparent (the reward for not killing her kids) to her grandchildren Alex, Tristan, and Katrina Lees. Then, on May 16, 2021, she suffered a massive stroke. Still, her family never imagined she would die. But 9 days later, she did! On her tombstone, the engravings will succinctly state Bernice Rink Lees (1935 - 2021). However, between those two dates lies the most important time of her life represented by "the dash", those 86 years she spent during her mission here on earth. She was very proud of her three sons and her one daughter, as well as her many grandsons, granddaughters, nieces, nephews, and in-laws and will reside forever in their hearts and mind. She was also very proud of her second husband, Rodney, because we all know behind every successful man there is usually a good wife (See Proverbs chapter 31) or sometimes a very surprised one! Remember her, but remember also that her journey is not over. God's universe is immense, if not infinite, and there is much work yet to be done, not to mention keeping a watchful eye over all of her loved ones from her lofty heavenly abode. We will all miss her tremendously, especially her granddaughter, Katrina, who says she will miss her the most of all. To all the grieving relatives and friends who adored and loved her, she would want us all to emulate her in becoming over-comers. Cherish those wonderful memories and go on and live life to the fullest measure. Make the most of your "dash"!

Bernice Rink Lees entered her earthly existence on May 21, 1935 in Scranton, Pennsylvania and migrated to a better one on May 25, 2021. During her adventure on this third planet from the sun, the one word that best describes her (albeit... View Obituary & Service Information

The family of Bernice Rink Lees created this Life Tributes page to make it easy to share your memories.

Send flowers to the Lees family.