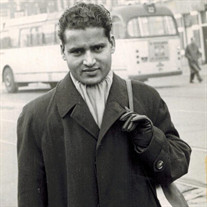 On Wednesday, September 2, 2020, Avi Ogale, loving husband, son, brother, and father of two sons, passed away at the age of 85. He was preceded in death by his father, Vyankatesh, his mother, Vimala, his brothers, Ravindra and Shashikant, and his son, Abhijit (Abhi); he is survived by his ex-wife, Sudha (Geeta), and his son, Abhimanyu (Manyu). Avi was born on March 9, 1935, to Vyankatesh and Vimala Ogale at Ogalewadi, Maharashtra, India. He received his bachelor’s degree in civil engineering from the University of Poona. He married Sudha Bhagwat of Bombay in 1960. In 1961, he and his young family (Sudha and newborn son, Abhi) moved to The Hague, Netherlands, as he pursued his post-graduate education in hydraulic engineering at the Delft Institute of Technology. In 1964, he and his family (now including Manyu) emigrated from Holland to Toronto, Canada, representing one of the early trailblazers of Indian immigration to Canada. In 1980, the family moved to Atlanta, Georgia, where he resided for almost a quarter-century, until his final move to Florida in 2005. Till the day of his passing, while still having a soft spot for Canada, Avi was a proud American, interested in the country’s history and politics, always grateful for the opportunity to have immigrated there in mid-life. It is the story of immigration in which Avi’s legacy, beyond his immediate family, is unique. As the first of his extended family to settle in Canada, through his efforts in terms of legal sponsorship, administrative paperwork, financial assistance, providing his home as temporary residence, and helping in all manner of ways to facilitate settlement of family members subsequently arriving, from his brother and sister-in-law and their three children to his wife’s siblings, Avi directly changed the lives of many people in his generation, not to mention the indirect ripples to multiple generations which have followed. Avi worked as a consulting civil engineer throughout his career and was involved in many notable projects such as the Brussels-Paris Expressway, the Spadina Viaduct and the Four Seasons Sheraton Hotel in Toronto, and the expansion of the international terminal at Hartfield-Jackson Airport in Atlanta. Apart from his scholastic interests, Avi was an avid sportsman and played multiple sports exceptionally well including cricket, tennis, table tennis, and, later in life, golf. He was the captain of his cricket team in inter-collegiate tournaments, admired for his calligraphic penmanship, an avid bridge player, and a great admirer of Indian classical music. In fact, he taught himself to play classical Indian violin, and was always on hand to perform at amateur music gatherings. In his later life, he enjoyed traveling, especially cruising. He will be profoundly missed, but comfort is taken in that he is now together with his first beloved son, Abhi. A pooja will be performed at the Hindu Temple in Castlebury, Florida next week to say our final good bye to Avi and place him in the hands of God. May God bless his soul and may he rest in peace.

On Wednesday, September 2, 2020, Avi Ogale, loving husband, son, brother, and father of two sons, passed away at the age of 85. He was preceded in death by his father, Vyankatesh, his mother, Vimala, his brothers, Ravindra and Shashikant, and... View Obituary & Service Information

The family of Avi Ogale created this Life Tributes page to make it easy to share your memories.

Send flowers to the Ogale family.